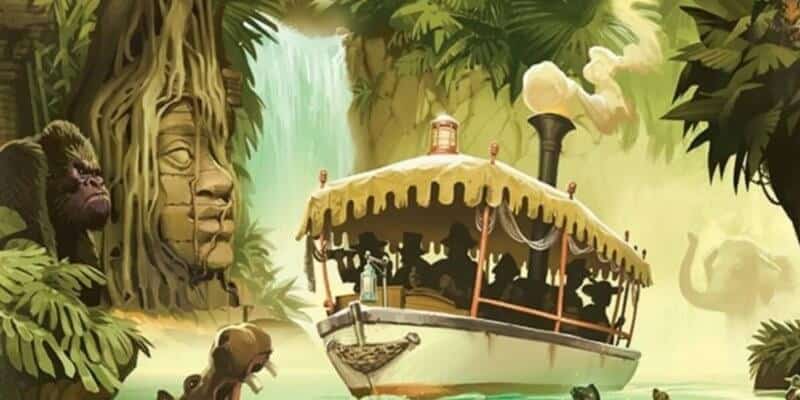 Game night is about to get a lot more interesting, Disniacs! The Disney Jungle Cruise Adventure Game is set to hit the shelves later this year. The game is produced by the same company that created the popular Villainous game, Ravensburger.

Comicbook reports that the Disney Jungle Cruise Adventure Game will be designed for 2-4 players at a time. Each player will be given the chance to skipper their own steam-powered riverboat. They will have to brave a dangerous river while picking up supplies and passengers. Players will also have to decipher clues to see which of four families will lead the Jungle Exploration Company originally founded by Alberta Falls.

Each player will get a small boat piece to move around a board designed like a weathered treasure map while also managing a bigger version of that boat. The game will also incorporate cards and dice. It is scheduled to become available in June 2020.

Honestly, one has to wonder what took them so long to make a Jungle Cruise board game. Disney’s Jungle Cruise is one of the original Disneyland attractions created by Walt Disney himself. It has withstood the test of time thanks to its timeless adventure. Skippers lead guests on an incredible adventure through the most dangerous rivers of the world while providing a comedic narration.

Embark on a river cruise where dangerous beasts and dry wit abound. Board a canopied tramp steamer piloted by your trusty skipper, who will expertly navigate you through some of the world’s most treacherous waters

Like another equally famous attraction, Pirates of the Caribbean, Jungle Cruise will become one of Disney’s latest movie franchises starring Dwayne Johnson and Emily Blunt. You can watch the trailer here:

Related: Is the Jungle Cruise attraction at risk of getting a movie makeover?

Are you a Jungle Cruise fan? Are you going to be adding this board game to your game night rotation? Let us know in the comments!