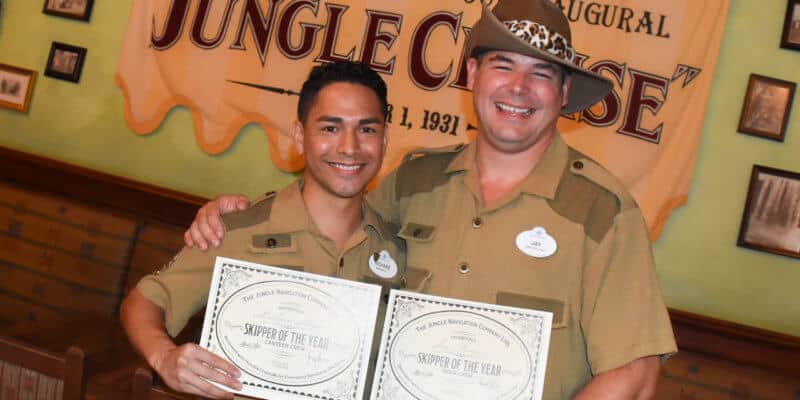 Have you ever traversed the Nile River and Amazon River on the same day? Ever dared to venture out into the African Congo and try your luck at meeting the natives? Ever seen the backside of water (or been interested in doing so)?

Then you know the sheer excitement and unquestionable tomfoolery that abounds when you set out aboard a tramp steamer for an adventure at the Jungle Cruise attraction at Magic Kingdom at the Walt Disney World Resort.

The gentle gliding of the steamer down the river, the beautiful scenery and the engaging animals that are part of the attraction make for quite an experience. But without the dry humor and copious puns doled out by the steamer’s skippers, the attraction would offer little more than a boat ride through a simulated version of the African Congo, South America and Asia. It’s the skippers aboard the boat that truly make the experience enjoyable and unforgettable.

Apparently, management at Magic Kingdom agrees, as they have awarded two Jungle Cruise skippers with a great honor for their efforts: they were both named Skippers of the Year. Jay Friesner, who works as an Attractions Host at the Jungle Cruise attraction and Richard Reyes, who works as the Food and Beverage Coordinator at Jungle Navigation Co. LTD Skipper Canteen were each nominated by their fellow Cast Members and then selected by their peers for routinely representing the best attributes of a Jungle Cruise Skipper.

Walt Disney Imagineering took photos of the punny pair and then digitally aged the photos to match the 1930s era represented in the Jungle Cruise attraction.

Watch the two skippers show off their new awards here:

Have you experienced the Jungle Cruise attraction at Magic Kingdom? What’s your favorite pun shared by the skippers? Let us know in the comments section below.

Comments Off on The Backside of Water: Jungle Cruise Skippers of the Year honored at Magic Kingdom