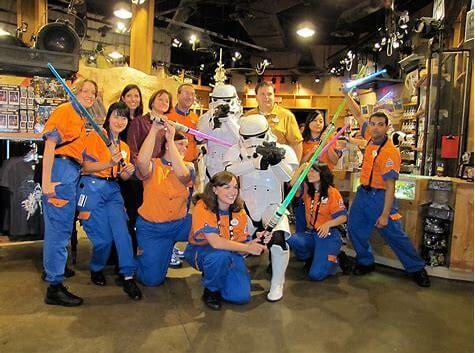 Have you ever wanted to be a Cast Member at Walt Disney World? If we’re honest, the idea has probably crossed the minds of those of us who love Disney World, at least once or twice.

And though Cast Members are immersed in the magic of Disney the entire time they’re on the clock, there are a few things that can sully the magic for those who’ve “earned their ears,” and it’s not what you might think.

Sure, there’s the inclement weather, especially in the summer, when the heat and humidity seem to have it out for everyone in their path. But we’re talking about something more prevalent–something that sticks around all year long, not just during the warmer months.

Yep, Guests in the parks. The unruly, unhappy ones who come to the parks, whether for the first or fiftieth time and seem to find something wrong with everything. And then they take it out on Cast Members whose number one job is to keep the magic alive for Guests of all ages. But what is a Cast Member to do when Guests don’t seem to want any part of that magic, when Guests seem intent on spoiling it for everyone around them?

“There are so many situations, so many things that happen every single day to cast members,” said Disney World Cast Member Tommy Fontenot, who’s been spreading the magic for over 14 years now. “Guests will push the boundaries; [Cast Members] serve as an emotional punching bag.”

Fontenot says he even sees Cast Members crying in the break room over things Guests have said and done.

“You have to develop a thick skin,” Fontenot added. “I’ve been called every name in the book for very petty reasons.”

It must be an incredibly rewarding–but incredibly stressful–job. During peak seasons at Walt Disney World, daily attendance can be as much as a quarter of a million people. That’s the same size as the population of the city of Reno, Nevada, so things can get crowded, busy and sometimes hectic.

Back in July, Inside the Magic brought you the story of a disgruntled Guest who didn’t have a FastPass for the Tower of Terror attraction at Disney’s Hollywood Studios. When the Cast Member at the attraction told her this, the Guest became angry and punched the Cast Member, giving her a swollen eye. The Guest then proceeded to push buttons and handle controls of the attraction. The Guest’s actions resulted in her being banned from Disney World for life, but no legal action was taken.

Also in July, a Guest showed up at the wrong time to enjoy an attraction at Magic Kingdom, insisting he had a FastPass for the ride. Seeing that he was upset, the Cast Member allowed him to move forward through the FastPass queue, but instead of being grateful to her, the Guests grabbed the Cast Member by the shoulders, turned her around to face him and shouted repeatedly, “I’m not your slave!” followed by “You don’t tell me what to do!”

When asked about his behavior, the man told investigators he didn’t like the way he was spoken to. His behavior netted him one lifetime ban from the Most Magical Place on Earth as well.

Another Guest–an oil scientist from Ohio–rammed his stroller into a Cast Member because he was asked to leave a viewing area at Magic Kingdom back in 2015. And in 2018, a 64-year-old Canadian man was arrested after he became impatient when he had to exit the Splash Mountain attraction because the ride had mechanical issues. He yelled, “Get the [unmagical word] out of my way!” and then pushed a Cast Member.

Thank goodness most instances of disgruntled Guests don’t result in such violence and physical conduct. But Guests do display some rather ugly, inappropriate and downright mean behavior at times.

Cast Members report instances of Guests yelling at them, calling them names, making sexual comments to them, and more. Some of the more common ugly behaviors have to do with Guests debating with Cast Members over ride height requirements and Guests scapegoating Cast Members when the weather was bad or when a ride is forced to close because of a malfunction.

Still, other Guests become rude and entitled, even demanding a “Magical Moment,” one of those spontaneous times when a Cast Member can do something special for a Guest, such as for a Guest who is having a rough day, for a family with a string of bad luck in getting a FastPass, or for a child with a disability to whom a Mickey balloon on Main Street might bring a huge smile.

One Cast Member recounted the story of a Magical Moment gone awry when he gave a young boy a FastPass for Splash Mountain, only to be approached by a grown man who had witnessed the moment and then demanded FastPasses for his entire family.

“It’s a magical moment because it happens when you’re not expecting it, not when you ask for it,” explained one Cast Member named Missy.

But it’s not all bad news. Some Cast Members are dumbfounded by kindness extended to them by Guests.

“Just be kind,” Cast Member Jake Klecker said. “It takes zero energy to be nice, and it takes so much energy to be negative and take your frustrations out on the poor Cast Member who’s just trying to do their job.”

Have you ever seen a Cast Member being disrespected at the parks? Did you do anything to brighten the Cast Member’s day? How has a Cast Member gone above and beyond for you or your family? And have you had the honor of extending magic to a deserving Cast Member? Let us know in the comments below.