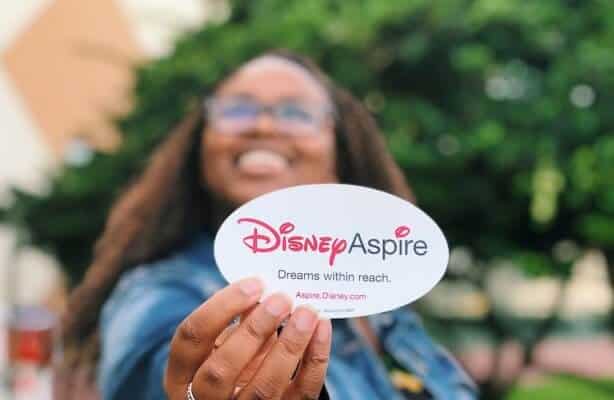 Walt Disney’s premise for most everything he accomplished in his lifetime centered around dreaming, working hard to achieve those dreams, and always aspiring to do the best and be the best.

And for some of those Cast Members at Disneyland in Anaheim, California, the program has been life-changing.

Alexis Ramdhani works in Guest Relations at Disneyland. She’s always had dreams of becoming a chiropractor, so she enrolled at Fullerton College where she planned to study kinesiology. But sadly, a car accident in 2014 on Christmas Eve injured her neck, and ultimately it changed her plans.

But thanks to Disney’s Aspire College Tuition Program (and some Disney magic), that’s not how Alexis’s story ends–in fact, it’s only beginning.

Ramdhani’s grandmother had worked for Disneyland for 14 years, and Alexis followed in her footsteps. And thanks to the Aspire Program, Alexis has returned to college and is pursuing a degree in communications and marketing at Wilmington University. She will graduate from the online program in 2020, and she’s planning to travel to Delaware to attend the graduation ceremony on campus.

“This is saving me so much money,” Ramdhani said. “There’s no way I would’ve ever been able to afford [the tuition].”

Tuition and fees at Wilmington University cost approximately $11,000 per year, but Alexis rests easy knowing her college education is paid for completely.

Willy McKenna loves his job at Star Wars: Galaxy’s Edge in a galaxy far, far away. But he’s also pursuing a master’s degree that will help him in this galaxy.

McKenna takes classes online at the University of Denver. The master’s degree program he’s in costs about $40,000, but Disney’s Aspire Program has already picked up the tab, making it possible for McKenna to pursue his degree in organizational leadership with an emphasis in project management.

“Personally, it is extremely motivating knowing that Disney is investing in my future,” McKenna said. He believes that what he’s doing through the Aspire Program will change his life. He’s hoping to begin a career in project management for Disney’s theme park division.

Could Disneyland possibly have a future Imagineer on their hands?

The Disney Aspire College Tuition Program has invested $150 million in the free education program. More than 90,000 Disney Cast Members are eligible right now to participate in the program which covers the cost of tuition for over 200 degree programs at colleges within its network.

The program just began last year, and in August, the Walt Disney Company celebrated the program’s first anniversary. Since the program began, there have been more than 8,000 Cast Members enroll in the network.

They too are hopeful about the life-changing impact such a program will have on their lives.