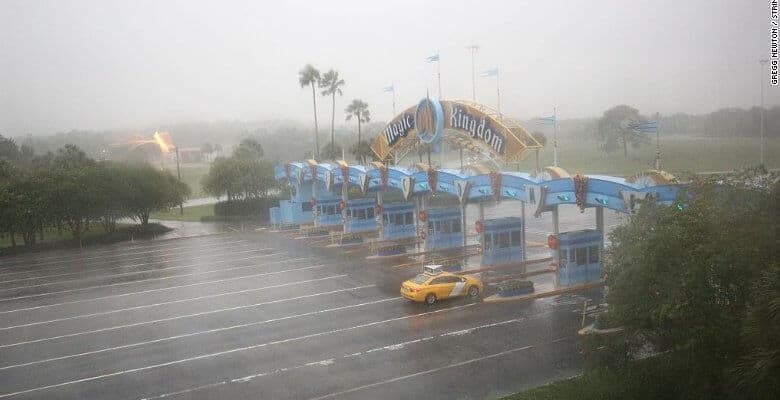 This is a developing story, and we will continue to add more information as it becomes available.

As of Friday evening, Hurricane Dorian was upgraded once again, this time to a Category 4 storm with 145-miles-per-hour winds, but Saturday morning forecasts give Florida a chance for missing a violent direct hit.

As of 8:00 a.m. ET, the National Hurricane Center’s forecast had the storm on a path to strike the northern Bahamas on Sunday or Monday, but then take a sharp right. If the storm follows such a trajectory, the center of the storm–the part with the highest winds–may miss a Florida landfall. Part of Dorian would still hit the state, but the center could miss the Sunshine State.

“We’re not out of the woods by any stretch,” said Fox 35’s meteorologist Jayme King. “This needs to be watched and all Central Floridians need to be on guard until the storm rides north of our location.”

Fort Lauderdale up to Cape Canaveral remain in the 3-day cone of uncertainty, and the 5-day includes even more of the state. 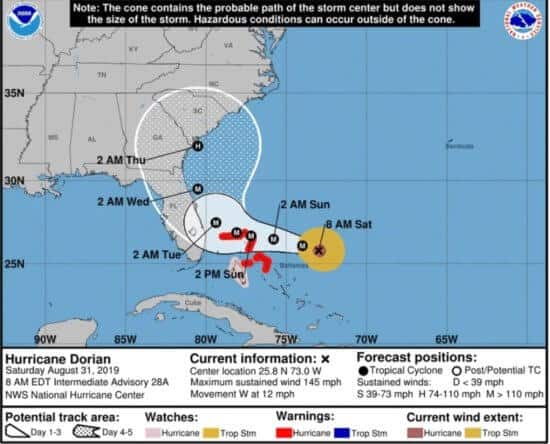 Some forecasters are saying that Hurricane Dorian has the potential to be the biggest hurricane to hit Florida since Hurricane Andrew in 1992. The latest models now show the storm making landfall Monday evening into Tuesday morning. Different meteorological models project varying post-landfall behavior on the part of Dorian, but most predict the storm taking a sharp turn toward the north once it hits land. Still other models predict the storm will cross the peninsula of Florida, into the Gulf of Mexico and then near the Florida panhandle.

The storm is currently expected to reach Category 4 status by Saturday with winds in excess of 130 miles per hour.

Central Floridians have had their eyes on a few things this week. Disney fans have been waiting for the opening of Star Wars: Galaxy’s Edge and the first day of Epcot’s International Food and Wine Festival, and everyone has been watching Hurricane Dorian, which was only upgraded from a tropical storm to a hurricane on Wednesday afternoon.

The storm is churning and growing–even the International Space Station took pictures of the potentially “monstrous” storm positioned over the Atlantic.

As of 5 a.m. this morning, the National Hurricane Center shows a projection with Hurricane Dorian making landfall somewhere around Jupiter in the early morning hours of Tuesday, September 3, while earlier projections had the storm making landfall Monday morning.

The storm is still expected to shift on a northwesterly path and head up so its center passes just south of Walt Disney World, which means the core of the storm will still be at hurricane-force strength 30 miles southwest of the city of Orlando by approximately 2:00 a.m. on Wednesday morning.

Latest reports Thursday evening had the hurricane at a Category 2-level storm, with winds swirling at 105 miles per hour. As of 11:00 p.m. local time, Hurricane Dorian was located about 295 miles east-northeast of the southeastern Bahamas. It was moving northwest at about 12 miles per hour, meaning that if it continues its current trajectory, the Most Magical Place on Earth could easily be in its path of potential destruction.

“There is an increasing likelihood of life-threatening storm surge along portions of the Florida east coast late this weekend or early next week, although it is too soon to determine where the highest storm surge will occur,” the National Hurricane Center said. “Residents should have their hurricane plan in place, know if they are in a hurricane evacuation zone, and listen to advice given by local emergency officials.”

According to Florida International University hurricane expert Hugh Willoughby, Hurricane Dorian can cause some real damage.

“As long as it’s fairly small and moving fairly fast, the big concern will be wind at the landfall point,” he said. “If it grows, as [hurricanes] tend to do, or if it stalls before landfall, we’ll have to worry more about storm surge.”

Many residents of Central Florida have already preparing for a possible Dorian landfall. People have flooded local retailers looking to buy bottled water, generators and other items that are in high demand when there’s a hurricane threat looming. Others, like these residents in Brevard County, Florida, have begun packing sandbags ahead of the storm.

The storm’s latest track seems to forecast Dorian reaching the Orlando area sometime Wednesday morning, September 4, which was several hours later than what had been predicted earlier in the day.

As of yet, Disney World has not issued a statement about the hurricane that’s barreling toward the Sunshine State, but we know that the resort does have policies and procedures in place related to hurricanes. You can read about those here.

This is a developing story and we are continuing to update this article as more information about Hurricane Dorian becomes available.

Check back here at Inside the Magic for the latest Hurricane Dorian updates and information about the storm’s effects on operations at Walt Disney World. Have you ever been to the parks during a hurricane? How did Disney accommodate Guests during the storm?