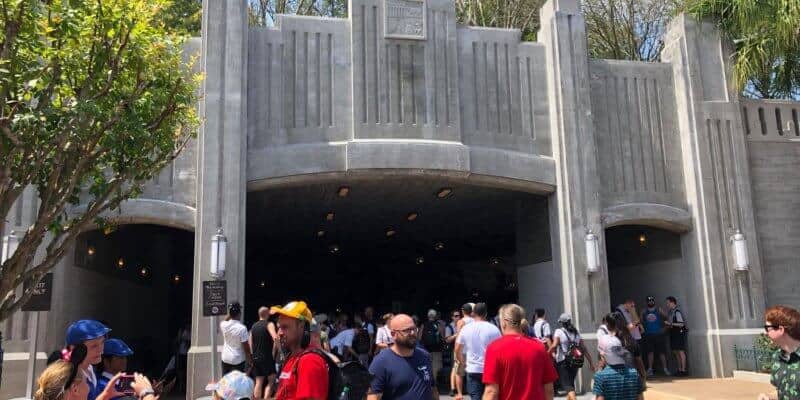 We were fully expecting crowds to be unbearable for two reasons: first, it’s Star Wars, and second, Disney World’s website has been prepping us since March to be ready for lines out the gates and no guarantee that Guests could even make it all the way into the new land because of what Disney referred to as “guest demand,” which was really just code for “massive crowds.”

But what we have seen so far doesn’t look like an unfathomable amount of “guest demand.” It certainly isn’t what we expected, especially when we compare opening day at Galaxy’s Edge to opening day at Pandora: The World of Avatar in May 2017 and opening day at Toy Story Land in June 2018.

Here’s a look at the crowds at the entrance to Galaxy’s Edge on opening day.

And here’s a look at the number of Guests milling around near the exit of Galaxy’s Edge on Thursday. (It doesn’t look unbearable!)

Now compare today’s not-so-crowded thoroughfares at Galaxy’s Edge to those at opening day at Pandora – The World of Avatar at Animal Kingdom in May of 2017. Pandora’s first day at Disney World saw crowds so thick, it was truly hard to move around the land at all, as you can see in this opening day video.

Opening day at Toy Story Land on June 30, 2018 was packed as well. Disney’s Hollywood Studios opened at 7:00 a.m. that morning, and by 8:00 a.m., the wait time in the stand-by queue for Slinky Dog Dash was five hours. By 9:00 a.m., Guests were waiting 3 to 4 hours just to enter the land, and the line to enter Toy Story Land weaved down through the former Pixar Place up in front of the Chinese Theater and back around toward the ABC Commissary.

So what does this mean? Is the supposed “guest demand” for Galaxy’s Edge lower than it was for Pandora and Toy Story Land? After all, Galaxy’s Edge only has one attraction operating as of right now, and the most anticipated attraction won’t open for a few more months. On Pandora’s first day, the land offered two attractions for guests to enjoy. Toy Story offered three attractions (if you include Toy Story Mania) on its opening day.

To be fair in the comparison, it’s important to note that FastPasses are not available for attractions at Galaxy’s Edge as of right now, and from what Disney has said, that’s the plan for the new land, even once the new Rise of the Resistance attraction opens in December.

Or do the seemingly smaller crowds at Galaxy’s Edge today simply mean that Disney World has perfected the art of crowd control by making use of “boarding groups” that only allow so many guests into the land at one time? Boarding groups eliminate the need for guests to wait in a long line just to enter the new land.

What do you think? Has Disney World gotten creative in giving us a false sense of less crowding at Galaxy’s Edge, or does the new Star Wars-themed land appeal to fewer guests than did Pandora and Toy Story Land? Let us know your thoughts in the comments section below.