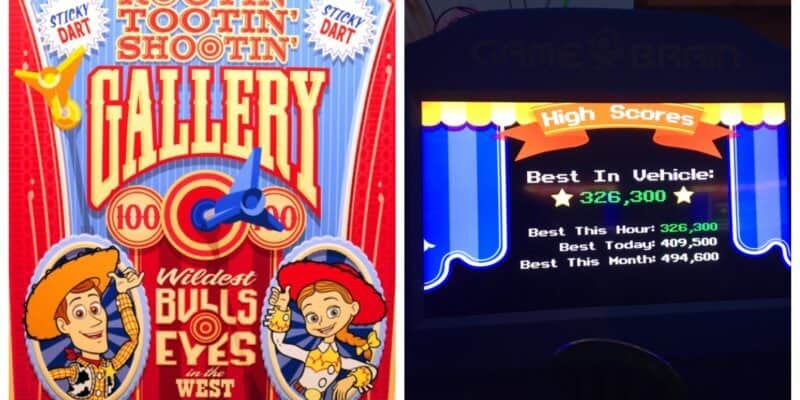 Do you want to score the coveted, “Best of Hour”, “Best of Week”, or even, “Best of Month” titles at Disney‘s Toy Story Mania attraction? We’ve got some fun tips and tricks that can help you achieve your best score!

Related: How to Get a High Score on Test Track!

Many guests are unaware of the easter eggs in the attraction that are worth points when cued. These cues often require teamwork between both guests in order to be achieved. Next time you grab your best shootin’ partner to ride the attraction, remember these cues to maximize your score:

The theme of this game is animals on a farm, and the most important point to focus on is the fence and hen house near the bottom left corner of the screen. Shoot the fox in that corner and it will release two hens, each worth more points than any other target during this game. A cat worth 1000 points will also pop up right behind the hen house at certain moments that is worth hitting. Repeatedly shoot these targets, and you can score above 50,000 points.

This game involves activating multiple cues in order to score the most amount of points. The main focus is near the top of the screen and the volcano. Immediately shoot the lava balloon at the top of the volcano worth 500 points. Two more lava balloons worth 500 points will appear in its place—shoot them as soon as they appear. Finally, three more 500 point lava balloons will appear—shoot them, and the volcano will erupt with balloons worth many points: shoot as many as possible!
Next, two meteors will appear in the top left and right corners. Both riders should shoot both three times, after which meteors of balloons worth many points will begin to hurl down onto the screen. Shoot as many as those balloons as possible before your time is up.

The key to this game is simple: in the top left and right corners of the screen, two 2000 point plates fly into the air. Hit both plates and the rocks will lift to reveal a tank that shoots plates worth 3000 points!

Timing is key in this ring toss game. The area to focus on is the aliens in the rocket. When you hit the aliens, they go down into the rocket briefly. The key is to toss rings on all of them quickly enough that they all go down at once. Once you do, the rocket reveals a robot. The robot will open its mouth in different intervals—shoot into the mouth of the robot. Each time the robot opens, it is worth more points, upwards to 5000 points each hoop if done quick enough.

This section is simple but requires accuracy. Simply shoot every target on the screen. Once every target is hit, new targets worth more points take their places. Keep this up all the way to the mine section, continuously hitting every target that appears.

Related: Is Disney’s Hollywood Studios Getting A Pixar Expansion?

These tips apply at the Toy Story Mania attraction in any of the parks, from Toy Story Land in Hollywood Studios, to California Adventure Park at Disneyland Resort. It may take some practice, so grab a fast pass and keep at it!

Do you have more tips? Share your tips and secrets to getting the best Toy Story Mania score in the comments below!