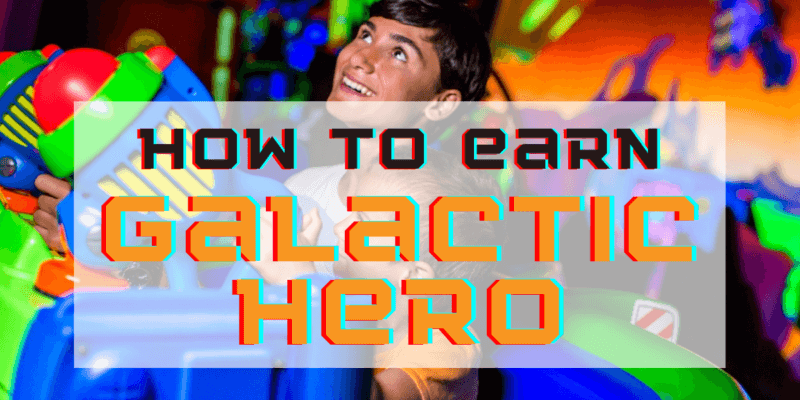 Galactic Hero — These are the 999,999 points that each Disney Guest yearns to earn while riding Buzz Lightyear’s Space Ranger Spin. This Magic Kingdom exclusive (though Disneyland has a sister ride) sits you in a toy Omnimover-based ride vehicle that guides you through Buzz Lightyear’s science fiction space vision.

Can you earn Galactic Hero? Here are our best tips for maxing out your score against Zurg and the Galactic Empire and earning that elusive title!

Step into Buzz Lightyear‘s fantastic galaxy. Though you are a Toy Story toy, you are also a true Space Ranger!

Connect with Star Command to defeat Zurg and rack up points to earn the rank and title of Galactic Hero. You will be seated two by two in a ride vehicle, each armed with your own laser cannon. Each player will aim at the “Z” targets to win the battle.

Before we found these high-scoring targets, we were averaging Planetary Pilot at the most — But through tried and true Space Maneuvers as well as inside tips from other Rangers, we’re able to give you the best chance at topping out your score!

Related: How to get a high score on Test Track!

Here are the things you need to watch out for when riding Buzz Lightyear’s Space Ranger Spin.

Not so fast, cowboy! This Giantobot will be the first thing you’ll see as your ride vehicle cruises on the Omnimover out of the startup tunnel. You may have noticed that your joystick will pivot your vehicle left and right — Go ahead and check out Gigantobot’s right claw hand, but don’t shoot it yet… you won’t be able to reach it.

Instead, worry about Boxobot (next up) for now, and after you shoot the Boxobot, turn back to face Gigantobot and fire at the claw hand. It ought to earn you 100,000 points per hit.

This is your first big target. You can shoot just about any “Z” target in the game for a number of points, but this one is a big score of 100,000 points per hit.

So how do you get to score some points? Aim for Boxobot’s left inside palm. This Rock-em Sock-em Robot has a lot of targets. Aim well. (And now you can turn back to Gigantobot’s claw hand).

The floor is lava! No, just kidding. You’re safe in your ride vehicle.

But as soon as you spot the volcano in the distance, start aiming for the tippy top. The “Z” target at the summit will earn you 50,000 points per hit. Go ahead and hit it as many times as you can while passing through this room.

The battery room has a lot going on! True to toy form, the batteries are where a lot of power is sourced in this game. The bottom row of “knockdown” batteries should source you 50,000 points if you can knock them all over.

An added bonus? This battery room is where Buzz Lightyear’s Hidden Mickey is placed! Over the robot’s left shoulder, (he will appear to the left of your car) you will see a small blue circle with orange circles on top… this is your intergalactic mouse buddy in bubble form!

The mother load — This high-score target is very hard to hit, and you’ve got to know the secrets! As you approach Zurg’s vehicle (abandon the batteries if you need time to practice this maneuver) as well as when you are leaving him, target the central bottom “Z” target. You can’t hit him head-on because of the angle the spaceship is set. This central elusive “Z” will score you 100,000 points PER HIT.

It’s possible to hit this one at least three times with some concentration and fancy shooting! Don’t forget to factor a split second between hits for your score to refresh (you’ll hear the chime in your vehicle).

If you are a galaxy sharpshooter with a quick trigger, you might be able to consistently earn Galactic Hero each vacation, capping out your vehicle at 999,999 points! Take a picture of your ride vehicle scoreboard and show it to a Cast Member in the gift shop (as you exit the ride) and they will give you a complimentary reward! When lapel buttons are not available, Galactic Hero stickers are given out to honor your outer space accomplishment!

Have you ever earned Galactic Hero? Leave us a comment with your top targets!