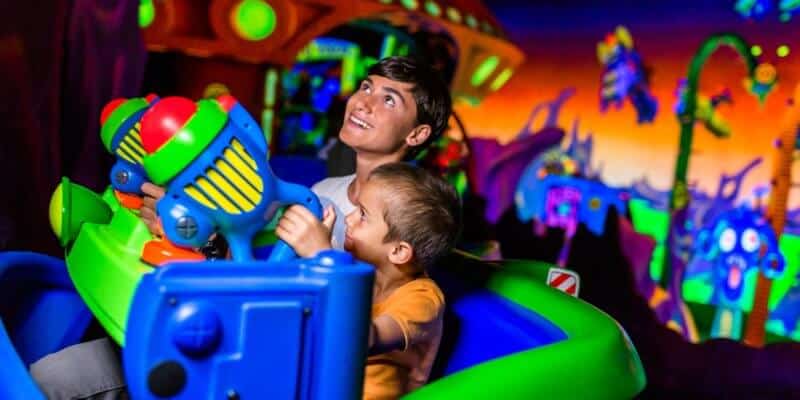 It’s no secret that Disney shuts down its theme park rides from time to time just to make any necessary updates to the technology. In fact, Tom Sawyer Island and Liberty Square Riverboat at Magic Kingdom just reopened after being closed for months due to refurbishment. And Kali River Rapids at Disney’s Animal Kingdom has been shut down for a few weeks now due to refurbishment purposes.

Now, one Disney fan is targeting the Tomorrowland theme park attraction, Buzz Lightyear’s Space Ranger Spin, as the next ride Disney Parks should extensively refurbish. Not because of its content, but because the technology is so outdated.

And now, one Reddit user really took the time and effort to put a lot of thought into what Disney could possibly do to refurb the Disney World attraction, Buzz Lightyear’s Space Ranger Spin. They began their post with:

Space Ranger Spin was the first Disney Parks ride I ever went on way back when I was in 2nd grade and it reeled me in way back then. I last rode it in 2018 when on a spring break trip during college and still had fun on it as young adult. I’d wager to say it’s my favorite ride at Magic Kingdom. The ride has always had a special place in my heart as a big Toy Story and Buzz Lightyear fan, and I hope that others enjoy it as much as I do.

However, I don’t think I’m crazy in saying that the ride has not aged terribly well. There are several issues, and places for improvement that the ride has that I believe warrant it a larger refurbishment of some sort. But, I do think that some things in the ride lend themselves to being left as is in order to preserve it’s atmosphere so I’d like to go over those as well. Don’t consider my thoughts here the end-all-be-all or the way that would make most people happy. This is just my opinion and I’m interested in hearing what others think about it, especially since there isn’t too much discussion about this ride on the subreddit anyways.

The Reddit user then went into what exactly they feel Disney needs to change, starting with the laser cannons explaining how they are “finicky” to aim with and the buttons feel “unresponsive.”

Something else this Reddit user would like to see Disney World improve on? The targets that Guests must shoot at. They write:

The current Z targets work fine and do their job. But I think this is another case where we can learn from the other Buzz rides. Those ones, minus the one in Shanghai, are color coded and shaped differently in order to show how many points there worth. This is really just a nice quality of life fix that allows for easier strategizing. And while we’re at it, it could be a good idea to shake up the targets even more. Veterans of the ride know where every high-scoring target in the ride is and how to max out your score. Why not give them another reason to come back and move targets around, and/or change how many points they’re worth?

This Disney fan also makes an excellent point in that some of the voice actors are a bit outdated. The fact that this Disney World ride was made even before any Toy Story fans got to actually hear what Zurg sounded like is a bit mind blowing. But now that we heard Zurg talk in Toy Story 2, it might be time to update the voice acting within the ride.

He even suggested possibly getting Andrew Stanton or anyone else who can replicate the Zurg voice to the ride would be ideal.

[…] getting Andrew Stanton or anyone who can replicate the Zurg voice would be great. And Buzz’s voice could do with a redo as well. Pat Fraley, the current voice of Buzz in the ride, has done a lot of voice work for Buzz in spin-off type projects and video games, but Mike McRae, who has voiced Buzz in several more recent video games, does a much closer impression as a Tim Allen sound-alike and could fill in assuming Tim Allen himself wouldn’t. Or maybe in some dream alternate universe, Wayne Knight and Patrick Warburton come back to reprise their roles from the TV show. A man can dream…

The Reddit user continues to explain how they also feel as though the animatronics and the visuals need updating as well, but just because they think this Magic Kingdom ride needs some improvements doesn’t mean they want to see the entire attraction changed. In fact, they go into detail of what should actually remain the same, explaining:

This ride has an iconic look. Something about all the bright neon greens, oranges, and purples soaked in blacklight all up in your face just gives this ride a unique feel in terms of visuals at the parks or at the very least at the Magic Kingdom. Give the ride a new coat of paint but don’t alter the colors too much. Also, keep the same designs for the enemies and aliens. They’ve become icons of the ride and I fear that changing them could lead to the sort of generic robots we see in the Shanghai version of the ride. You can really tell that this ride was something that was made when the only significant piece of Toy Story media that had been made was the first movie. If it were made after the second movie or TV show (which I loved growing up) you might have seen less of these unusual yet charming design choices we see in the ride today.

I don’t think Disney would ever change this but I wanted to bring it up anyway. The story is simple, understandable, and is what any kid would wanna do: Become a space ranger, get a laser blaster, and shoot Zurg and his allies to thwart his plans. I don’t see a need to bring in or add any characters from Toy Story 3 or 4.

So, what do you think? Should Disney take the time to update and refurb the Magic Kingdom Tomorrowland attraction Buzz Lightyear’s Space Ranger Spin? Let us know in the comments below.