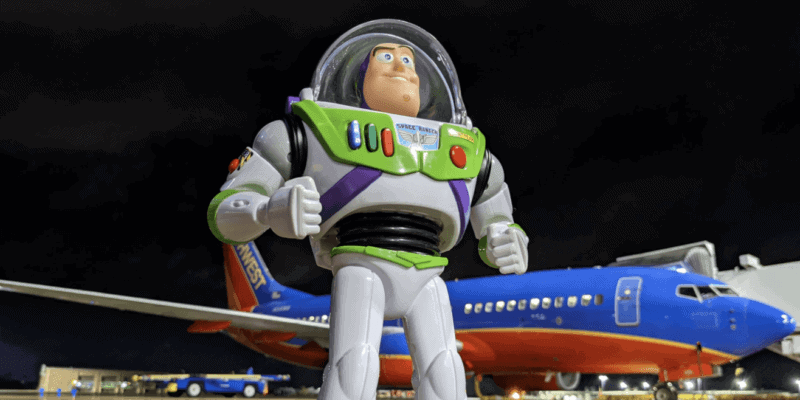 Southwest Airlines has made magic happen for one family after a beloved Buzz Lightyear toy was left behind on an airplane. Southwest shared the heartwarming story, plus photos of the Disney action figure on his adventures, to their official Facebook page.

“Hagen and his family had landed at Dallas Love Field and were already driving off in a rental car when they realized Hagen’s special buddy was left behind on the plane. By the time they noticed, the plane was already well on the way to its next destination. Eventually, the aircraft made it to Little Rock, where it was scheduled to terminate for the night. That’s where Jason, a Ramp Agent at LIT, noticed Hagen’s left-behind buddy.

Jason knew someone was missing their friend badly, so he began some investigating to discover who he belonged to. Soon, a name written on the bottom of the boot caught Jason’s eye: “Hagen.” After more digging, Jason learned there was only one “Hagen” who had traveled on that aircraft that day. Instantly, Jason came up with a plan…

A few days later, Hagen and his family received a special surprise in the mail. Not only was his buddy returned, but he arrived in a hand-decorated box, complete with a letter describing his mission at Southwest Airlines, and pictures to boot.

“There’s definitely not enough good in this world, and for someone to take the time out of their day to do that for strangers means the world to us.” –Ashley, Hagen’s mom. #SouthwestHeart”

Buzz even came home to Hagen — who looks beyond thrilled to see his best friend — with a special note, presumably written by the magic maker, Jason:

I am very excited to return to you upon completing my mission. I was able to explore the airport and spaceport in Little Rock, Arkansas while I was away and have included photos of my adventure. My journey has taught me a lot, but I am so thankful to return to my buddy.

To Infinity and Beyond!

We are so glad to see Hagen reunited with his best bud, Buzz, thanks to the kind employees at Southwest Airlines.

Located at Walt Disney World Resort’s Magic Kingdom Park, Buzz Lightyear’s Space Ranger Spin is fun for the whole family! The all-ages ride allows Guests to battle the evil Emperor Zurg while competing against one another in a friendly competition.

The official description of the ride reads:

Do you have what it takes to stop Zurg and his rampaging robot army before it’s too late? The fate of the universe is in your hands!”

The official description of the Disneyland version of the ride reads:

Andy’s got some new games—and the toys are taking over. Put on your 3D glasses, take a seat in a swiveling carnival car and twirl through the portal to a wild world of toys.

Compete with other players for the highest score on all the action-packed games. May the best toy win!

It’s safe to say that Woody, Bo Peep, Buzz, and the rest of the gang from Andy’s room won’t be going anywhere anytime soon.

What do you think about this positive news about Southwest Airlines returning a lost Disney toy?

If you’re ready to visit any Disney Resort worldwide, let the experts at Academy Travel help you plan every magical detail!