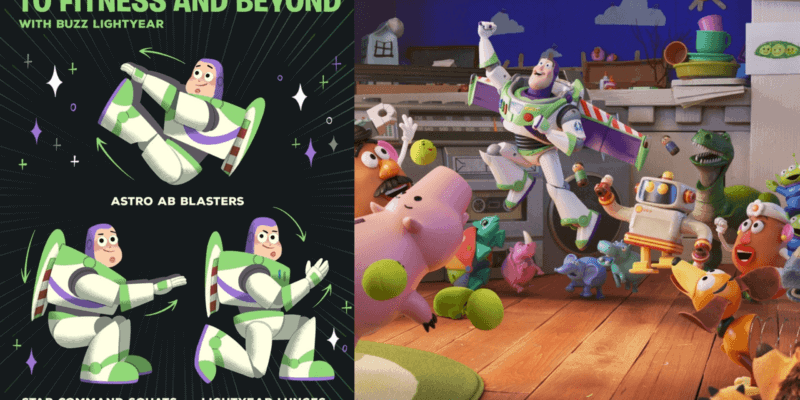 Buzz Lightyear remains in the headlines thanks to the Pixar Popcorn short, To Fitness and Beyond. In the short, Buzz Lightyear attempts to lead Bonnie’s toys in an exercise class, but things keep going wrong. Returning characters in the short included Mr. Potato Head, Forky, Hamm, Rex, Slinky Dog, and the Little Green Men.

It would seem that the Buzz Lightyear workout may be catching on as Pixar has just shared how to follow in the Space Rangers’ footsteps and do your very own Buzz workout:

This is working out…with style! Stream the Pixar Popcorn short, To Fitness and Beyond, now on #DisneyPlus.

Of course, this isn’t the last time we’re going to see Buzz at Pixar. Lightyear is an upcoming film set to release next year that works as a sort of spin-off of the Toy Story franchise. The film will follow Buzz Lightyear the pilot (who went on to inspire the toy) and details how a young test pilot became the Space Ranger that everyone knows him as today.

Despite causing a bit of controversy with the casting of Chris Evans as Buzz, it isn’t the first time that the character hasn’t been voiced by Tim Allen. Patrick Warburton famously played Buzz in the Buzz Lightyear of Star Command television show.

Disney and Pixar have clarified that Chris Evans is not replacing the voice of Tim Allen as the toy version of Buzz, he is playing the human counterpart the toy is based on and that’s where his role will end.

As for the Pixar Popcorn shorts, To Fitness and Beyond fans also get to enjoy:

Now excuse us; we’re off to go and do several Lightyear Lunges…

Have you seen the new Pixar Popcorn shorts on Disney+? Let us know what you think of them in the comments below!