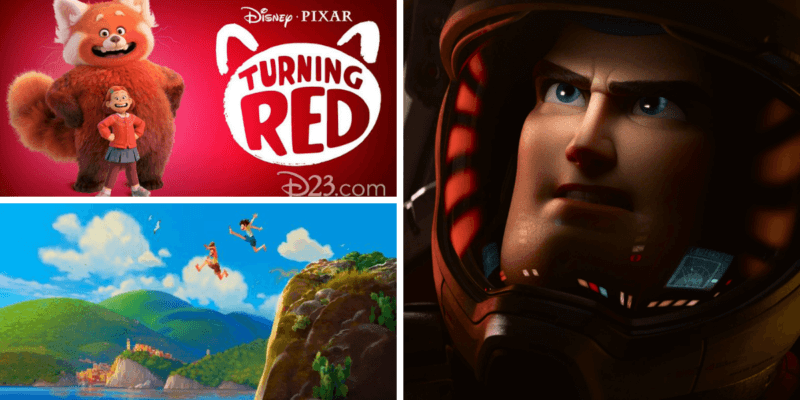 It’s official: Disney has so many new films and shows releasing in the next few years that we don’t know what we’re most excited about. As part of their 2020 Investors Day, The Walt Disney Company shared all of the major movies and series coming soon to theaters and Disney+ — including everything on the horizon for Pixar Animation Studios.

In case you missed it, here’s a roundup of every announcement from Pixar, including the films hitting theaters and the series heading to the Disney+ streaming service.  Some of these descriptions are official synopses released by Disney while others were shared by D23.

For a roundup of all the major Lucasfilm announcements, click here.

For a roundup of all the major Marvel Studios announcements, click here.

Pixar always has some amazing films in the works — from Soul coming this holiday season to Luca coming just in time for summer — so here’s what we know is coming soon.

Disney & Pixar’s all-new film Luca. Directed by Enrico Casarosa and produced by Andrea Warren, the film will take audiences to a beautiful seaside town on the Italian Riviera to meet a boy named Luca as he experiences an unforgettable summer with new friends. Luca opens in theaters Summer 2021.

In Turning Red, fans will meet Mei—she experiences the awkwardness of being a teenager, with an added twist: when she gets too excited, she transforms into a giant red panda. Turning Red comes to theaters March 11, 2022

Blasting into theaters June 17, 2022, Lightyear is the definitive story of the original Buzz Lightyear. Voiced by
Chris Evans, get ready to go to “infinity and beyond” with Lightyear.

What is it that makes you…YOU? This December, Pixar Animation Studios’ all-new feature film Soul introduces Joe Gardner (voice of Jamie Foxx) – a middle-school band teacher who gets the chance of a lifetime to play at the best jazz club in town. But one small misstep takes him from the streets of New York City to The Great Before – a fantastical place where new souls get their personalities, quirks and interests before they go to Earth. Determined to return to his life, Joe teams up with a precocious soul, 22 (voice of Tina Fey), who has never understood the appeal of the human experience. As Joe desperately tries to show 22 what’s great about living, he may just discover the answers to some of life’s most important questions. Directed by Academy Award® winner Pete Docter (Inside Out, Up), co-directed by Kemp Powers (One Night in Miami) and produced by Academy Award nominee Dana Murray, p.g.a. (Pixar short Lou), Disney and Pixar’s Soul is streaming exclusively December 25, 2020 on Disney+.

Get excited for some just-announced shows coming very soon to Disney+. Below are all of the series we can expect from Pixar Animation Studios that will head to Disney’s streaming service in the near future.

Win or Lose, Pixar’s first-ever long-form animated series, which debuts exclusively on Disney+ in February 2023, follows a middle school softball team in the week leading up to their championship game, and each episode is told from the perspective of a different character.

Grab a quick snack with Pixar Popcorn, a collection of mini shorts starring some of your favorite Pixar characters in all-new, bite size stories.

In the Up spin-off Dug Days, Dug discovers the dangers of suburbia like puppies, fireworks, and… SQUIRRELS!! Dug Days will premiere on Disney+ in Fall 2021.

Pixar is also speeding ahead with a new series following Lightning McQueen and Mater on a road trip across the country. Featuring new characters, old friends, and imaginative destinations; coming to Disney+ in Fall 2022.

Which of these upcoming releases from Pixar Animation Studios are you most excited for? Let us know in the comments!