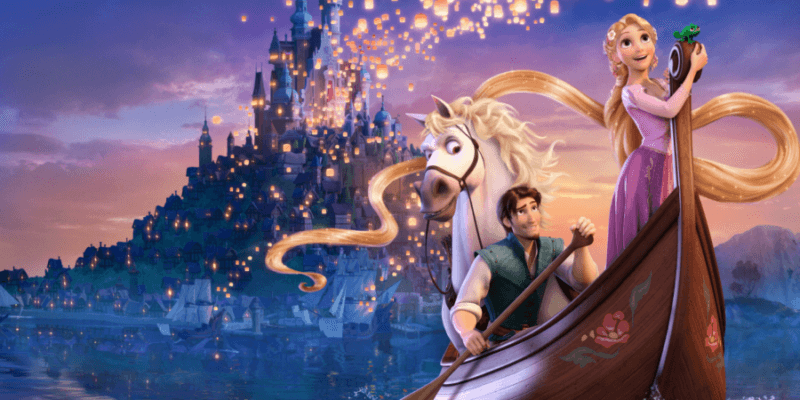 Since Disney fans first met Rapunzel (voiced by Mandy Moore) and Flynn Rider (voiced by Zachary Levi) in Tangled (2010), they’ve clamored for the IP to be included in Disney’s theme parks far more than it currently is.

At present, only the Tangled quick service restaurant at Shanghai Disneyland and the now-famous Tangled themed bathrooms at Walt Disney World Resort’s Magic Kingdom Park give Guests a taste of Corona when they visit a Disney theme park property.

Disneyland Resort in Anaheim, California, Disneyland Paris, Hong Kong Disneyland, and Tokyo Disney Resort all lack significant Tangled theming at this time (though there is a small Tangled tower at Disneyland).

Soon, however, that is all about to change.

…at Tokyo Disney Resort, the largest expansion ever for Tokyo DisneySea is underway, Fantasy Springs as its called, will feature new areas and attractions inspired by the worlds of Frozen, Tangled, and Peter Pan’s Neverland, and is set to open in 2023.

Since multiple Disney Parks construction projects — like the Mary Poppins Cherry Tree Lane addition at EPCOT — were canceled due to the COVID-19 pandemic, it was encouraging to hear Chapek confirm that Fantasy Springs is still happening!

As Disney Parks fans can see from the official Disney concept art [above], visitors to the new area with Tangled theming will be greeted by Rapunzel’s tower rising above a fairytale-inspired courtyard. The building on the left that resembles the Snuggly Duckling is likely to be the Tangled Tree Tavern, a quick-service establishment that already exists at Shanghai Disneyland [below].

The Disney Fandom Wiki has shared additional details about what Guests who visit Fantasy Springs can expect, including a Tangled ride!

According to their information:

Guests will board gondolas for a romantic boat tour of Rapunzel’s “best day ever” as Rapunzel journeys with Flynn Rider to the lantern festival. Countless flickering lanterns illuminate the attraction’s climactic scene while Rapunzel and Flynn sing the iconic song “I See the Light” [composed by Disney Legend Alan Menken (Aladdin, The Little Mermaid, Beauty and the Beast)], leading to an unforgettable finale.

The ride sounds similar to Frozen Ever After in Walt Disney World Resort’s EPCOT theme park. The Frozen-themed attraction replaced the Maelstrom ride — which opened in 1988 — in the World Showcase’s Norway pavilion.

There is no word yet on what types of character meet and greets might be available in Fantasy Springs. Presumably, however, once pandemic protocols have ended and Tokyo Disney Resort resumes normal operations, Flynn and Rapunzel will both be present in this new Tangled area.

We would also love to meet Pascal — and maybe even a few Snuggly Duckling thugs!

Related: Recipe: Cozy Up This Fall With Rapunzel’s Hazelnut Soup!

In addition to finally getting their just due in Disney Parks, Disney Princess Rapunzel and Pascal will serve as the masthead on the luxurious new Disney Cruise Line ship, the Disney Wish [above].

Although we don’t have an official sailing date, we know Disney’s first Triton Class cruise liner is set to take her maiden voyage in Summer 2022.

From the sounds of things, life for Disney fans is about to get a lot more Tangled! Do you plan to visit Tokyo DisneySea to visit Corona? Do you hope a Tangled land comes to more Disney Park properties in the future?