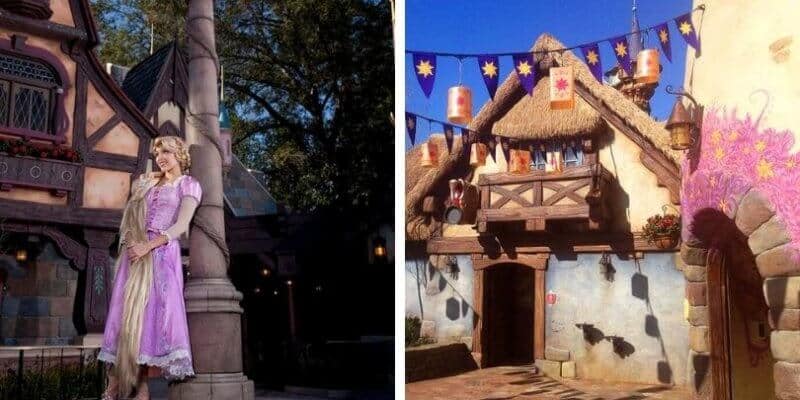 I’ve got a dream — and so do other Disney Parks fans!

When the kingdom’s most wanted, and most charming, bandit Flynn Rider hides in a mysterious tower, the last thing he expects to find is Rapunzel, a spirited teen with an unlikely superpower: 70 feet of magical golden hair! Together, the unlikely duo sets off on a fantastic journey filled with surprising heroes, laughter and suspense

The only downside is right now, there are only a handful of smaller themed areas or icons that this fan-favorite animated movie has inside the Disney Parks. There are the Tangled-themed bathrooms at Magic Kingdom in Walt Disney World, a Tangled quick-service restaurant inside Shanghai Disneyland, and Rapunzel’s tower at Disneyland Park in Disneyland Resort — all of which you can see represented in the images below.

The Tangled tower at Disneyland Park in Disneyland Resort actually includes a fun hidden gem! If you didn’t know, it actually glows at night every so often — check out the video below posted by YouTuber DatelineDisneyland to see the tower come to life.

Most recently, we reported that Tangled is confirmed to be featured in Tokyo DisneySea as part of the Fantasy Springs expansion, which has several fans excited. However, there are other fans who are wishing more Tangled would come to the parks within the United States.

Inside the Magic reader Sandra expressed “We need a Tangled ride in the USA, please!” in which David K. echoed similar thoughts saying “I would rather see more projects in this country first.”

Facebook follower Chelsea B. said “Bring more Tangled to the states too!!” and Sandra B., another Facebook fan, noted “We need this Tangled ride at one of the US parks please! That would be my dream!”

Julianne A. echoed these comments, sharing her own thoughts with us, “Too bad not in the US Disney parks” and Maegan D. shared a similar comment saying “I hope this comes to disney world! So jealous, Tokyo has the new frozen land / ride and now this!!!!”

Nick S. said he has wanted a Snuggly Duckling restaurant put into the Disney Parks, writing “I’ve been really hopeful for YEARS to get a snuggly duckling”.

On a recent Instagram post in which we asked about what ride rethemes fans might want, one of our followers, Kady G. (@thismamalovesdisney) shared, “I don’t think they need to retheme anything but I think that Tangled deserves more than a bathroom area!!” in which several other users agreed with her.

Mony (@magicofmonystravels) expressed her thoughts, saying “Rapunzel deserves better than a bathroom!!!!” in which The Disney Mama (@thedisneymama_) replied, “I couldn’t love this comment more”.

I, personally, as a huge fan of this film, would also love to see Rapunzel get more representation in the Disney Parks within the U.S. Whether that be a Snuggly Ducking restaurant, a Tangled attraction, or something else. No matter what, it’s clear that plenty of Disney fans believe Rapunzel certainly deserves more than restrooms.

At this time, there is no word on if Disney World or Disneyland will be adding Tangled to their theme parks in the form of a new attraction or restaurant.

Do you wish to see Tangled added to Walt Disney World or Disneyland? What would you like to see installed? Let us know in the comments below.