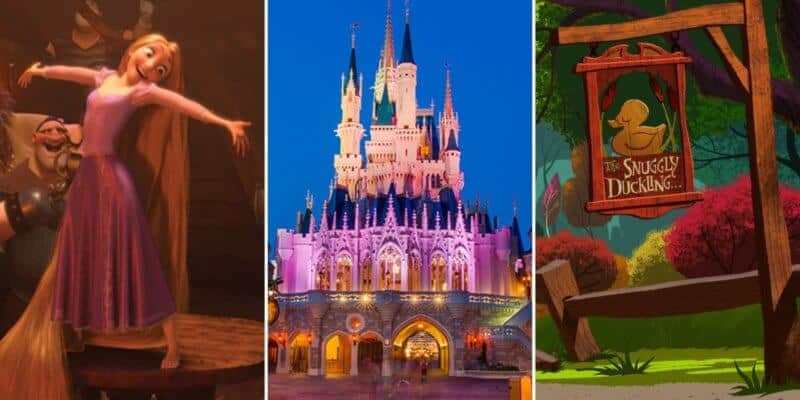 I’ve got a dream — Of Disney Parks building a real-life Snuggly Duckling right out of the 2010 Disney animated movie, Tangled.

Tangled was a hit for all ages as everyone fell in love with Rapunzel’s ambitiousness, Flynn’s good looks but also his soft side, the adorable Pascal and of course, everyone’s favorite horse, Maximus. The only downside is right now, the only thing based off of this incredible movie inside the Disney Parks is the Tangled-themed bathrooms at Magic Kingdom in Walt Disney World.

Now, don’t get me wrong, these are easily the nicest and prettiest bathrooms on Disney property, but I think Rapunzel and her film deserve so much more than just some restrooms. So, what if Disney built a real-life Snuggly Duckling where guests could visit? Well, I have some ideas!

Where Would The Snuggly Duckling Be Located?

I think the perfect spot for The Snuggly Duckling would be inside World Showcase at EPCOT in Walt Disney World. If we want this location to serve beer and other alcoholic beverages, just as they do in the film, I don’t think it belongs inside a park such as Magic Kingdom and the atmosphere of the Animal Kingdom just wouldn’t go. Disney World could build this inside Disney’s Hollywood Studios, but personally, I just imagine it fitting perfectly into the Germany Pavillion in World Showcase.

If Disney were to choose a different resort to build this real-life Snuggly Duckling, I could also see it being built over at Tokyo Disneyland, since they just built an entire new Fantasyland area, including an incredible Beauty and the Beast attraction. However, again if we want The Snuggly Duckling to serve beer, this would get ruled out as right now, the only location inside Tokyo Disneyland that serves alcohol is Club 33.

What Would The Atmosphere Entail?

Well, for starters, there would be a bar right when you walk inside, similar to the Rose and Crown Pub in the England pavilion. Tables and chairs would surround the bar for Guests to sit down and enjoy a beer and some finger foods. And of course, there would have to be a stage set up, just like in the movie.

Every 30 minutes or so, the curtains could open and Guests could enjoy a short performance of “I’ve Got a Dream” by Pub Thugs animatronics including Hook-Hand playing the piano, Big Nose singing about his dreams of finding true love, and of course, Vladimir with his collection of unicorns. We could even see a special appearance by Rapunzel and Flynn as they sing about their dreams as well!

What’s On The Menu?

So, with The Snuggly Duckling being located inside World Showcase at EPCOT, this means the pub could offer a wide selection of beers on tap, wine by the glass, and a few specialty alcoholic beverages themed off of the film.

As for food, The Snuggly Duckling could offer finger foods and bar bites including a bavarian pretzel with beer cheese, potato pancakes, a small plate of bangers and mash, and spätzle. They could also replicate the Snuggly Duckling Platter appetizer, which is offered at Rapunzel’s Royal Table aboard the Disney Magic. It is a charcuterie board with a selection of pumpernickel and German mustard.

For the sweet tooths, there could also be German chocolate cake or apple strudel!

So what do you think? Should Disney build a real-life Snuggly Duckling? Let us know in the comments.