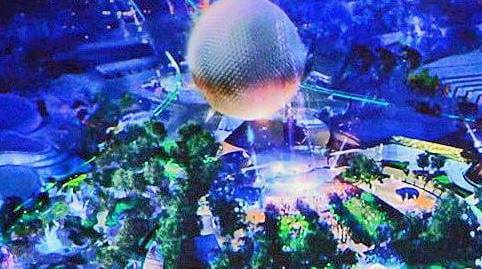 We have updated this article since it was originally published to include more information regarding the project postponements.

A few months ago we surmised that from the disappearance of ride times on the Walt Disney World Resort webpages, that the Spaceship Earth attraction was indeed going to close for major refurbishment and new scene additions, and guests would no longer be able to ride. But upon the July 2020 reopening, officials shared that EPCOT would welcome Disney fans with Spaceship Earth in its remaining state, prehistoric humans and all!

Now, it looks like both the Spaceship Earth refurbishment, as well as the Mary Poppins Attraction in World Showcase, have been officially postponed. We can only hope that they are not completely scrapped from the theme park.

Inside the Magic personally confirmed with Disney today that the projects are on pause. Disney has stated that they are evaluating long-term projects and they have made the decision to postpone the development of the Mary Poppins attraction, as well as the refurbishment for Spaceship Earth.

Patrons noticed the removal of these two white models from the EPCOT experience and many were concerned. The EPCOT experience has been an exploration center for Disney fans and EPCOT nerds to imagine what the upcoming refurbishments and enhancements will look like. Using projection mapping in an amazing way, it both informed Disney Parks Guests about concept art, the new historic transformation ahead, and certainly was both nostalgic and hopeful. You can still find the EPCOT Experience tucked to the side of Future World (headed towards the Mexico pavilion) as other new EPCOT neighborhoods have started to bud up around it.

While it’s sad that these blueprints for the attractions must return to the vault, for the time being, we hope that the goal of enriching EPCOT with these two Imagineering projects will continue to be seen. EPCOT still has a lot of work ahead of it, with the Guardians of the Galaxy: Cosmic Rewind indoor roller coaster as well as the Future World overhaul. It’s not unreasonable to think we will see these projects well after Walt Disney World’s 50th anniversary or perhaps rekindled when the budget completely convalesces from the global closures.

After all, Spaceship Earth, EPCOT’s iconic attraction, has been feeling the squeaky wheel for some time, and with the sometimes failing future simulation that closes the ride, a Spaceship Earth Refurbishment (with possibly a new sponsor) should be on the horizon if this armchair Imagineer had her way.

The Mary Poppins Cherry Tree Lane addition would be a charming plussing of England’s World Showcase pavilion, and we look forward to seeing Mary’s umbrella peeking from the clouds. But we’ll be a bit more patient for this practically perfect expansion to EPCOT.

How do you feel about not seeing the Spaceship Earth Refurbishment coming in the near future? What about Cherry Tree Lane returning to the vault? Leave us a comment below!