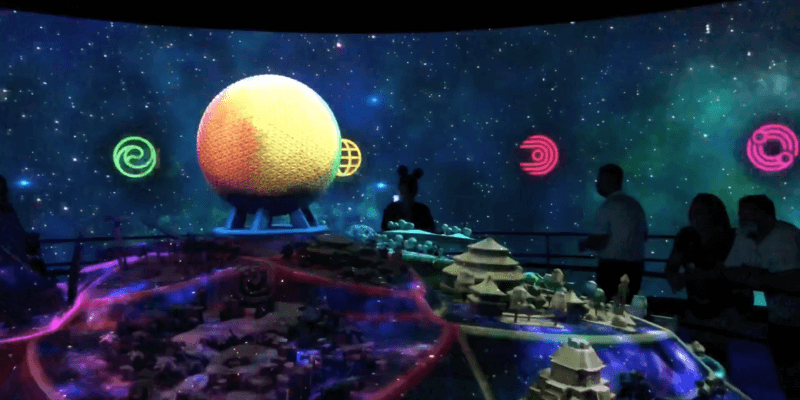 As EPCOT reopens to Walt Disney World Guests once again, the EPCOT Experience–which showcases the changes coming to the theme park–have now removed two key projects: Spaceship Earth and Mary Poppins. We now have, and included an update on these projects and what this removal ultimately symbolizes since this article’s original publication.

The EPCOT Experience is located in the Odyssey Events Pavilion in Future World between Test Track and the Mexico Pavilion. It was created by Walt Disney Imagineering and gives Guests an inside look into EPCOT’s historic transformation, including attractions and projects coming soon. With the Spaceship Earth refurbishment and the Mary Poppins attraction both removed from the video, many are left wondering if these projects will come to be in the future.

Disney has stated that the Spaceship Earth refurbishment has been delayed, and has now confirmed that the Mary Poppins attraction is also postponed.

Lol this is where the Spaceship Earth section of the EPCOT Preview show would play, Mary Poppins section of the show has been removed too! pic.twitter.com/xORJwvsQVP

You can watch the EPCOT Experience show here:

A Disney spokesperson said, “As with most businesses during this period, we are further evaluating long-term project plans. The decision was made to postpone development of the “Mary Poppins”-inspired attraction and Spaceship Earth at this time.”

The Mary Poppins attraction was first announced at the D23 Expo last summer and while few details have been revealed on this project, we know that it will be located in the U.K. Pavilion with the addition of Cherry Tree Lane and Guests will enter through the Banks’ house experience the attraction.

Spaceship Earth closed for its refurbishment at the end of May.

Disney described the intended changes as such:

However, last month, the union representing Attractions, Custodial, and Vacation Planning Cast Members at Walt Disney World, Local 362 Union, broke the news that Spaceship Earth’s refurbishment is delayed until further notice and Guests will be able to experience the time-traveling attraction the way it was before the parks experience their unprecedented closure.

Both projects were originally included in the EPCOT Experience showcase, and their removal combined with the delays and lack of updates raises suspicion about their status and Disney’s plans going forward.

Book your next Disney trip with Academy Travel!

Comments Off on Two Attraction Projects Removed from EPCOT Experience