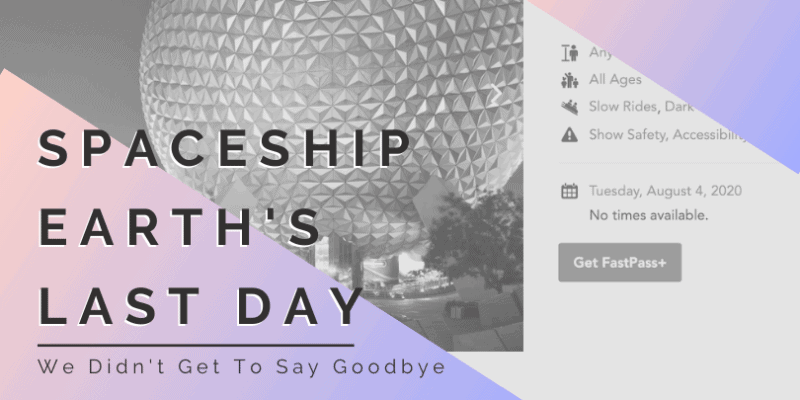 Walt Disney once said EPCOT, “would always be in a state of becoming,” and Spaceship Earth has very much lived up to that statement. Spaceship Earth’s fourth update since the attraction opened in 1982 would begin on May 26th – if you’re reading this article as we publish it – that’s tomorrow. The date should have marked the temporary closure of Spaceship Earth in Walt Disney World’s EPCOT (yes, we’re capitalizing!) in order to redesign, refurbish and update the “guts” of an everchanging iconic ride.

With Walt Disney World not yet acknowledging a reopening date, what version of Spaceship Earth will we see when this park reopens?  We didn’t get to say goodbye! Will the attraction remain closed to the public? Will The Walt Disney Company allow us a few more weeks to pack in a farewell ride? The answer looks to be that we will not be riding, evident from the Available Ride Times on the attraction’s website page.

That doesn’t mean we had given up hope of cramming a “last ride” in before the closure date. Many folks like to bid farewell to a closing attraction, such as when The Great Movie Ride or The Honey I Shrunk the Kids Playground closed. Oftentimes, we remember fondly our last treks through the attractions, but it appears this time, we won’t get the chance to say goodbye. Instead, we must look forward to the future of Spaceship Earth and the changes that are coming with it. Twitter user Nathan Hartman is remembering both opening day for Spaceship Earth as well as tomorrow’s official closure date in the tweet below.

Remember when today was going to be the last day of Spaceship Earth? pic.twitter.com/PFkDwDk5O4

The Disney Parks Blog gave us a large heads up that Spaceship Earth would be closing for a full refurbishment. Many fans understand that period of closure to be a long one; up to two years. Of course, big Parks Fans caught wind of the refurb news months before the Disney Blog Post but were very excited to see future concept drawings of what they might expect when the attraction reopened.

Walt Disney Imagineering released several photos in the post, revealing that light would transform the attraction in new ways: We’ll hear a new voice narrating our journey through time and space. We can expect some new scenes, the DPB said we should also see many of the moments we know and love updated in some amazing ways.

Twitter user Nick was pensive about the updates, jesting that 2020 ought to have a moment frozen in time. We’re excited here at Inside the Magic to see just what lies beyond that 1970s California garage scene we last ended with. What “current” scenes will we see?

Spaceship Earth: Our Shared Story better have a scene about 2020 in it

The geodesic sphere took 26 months to build, based on designs by science fiction writer Ray Bradbury, who also helped write the original storyline for the attraction. The ride was accessible during EPCOT’s opening day in 1982, when then-president of AT&T (the attraction’s main sponsor) dedicated Spaceship Earth and said, “Now as you will soon see, Spaceship Earth’s theme is communications, civilization, and communications from Stone Age to Information Age, and I, therefore, think it is very fitting that we dedicate Spaceship Earth to all of the people who have advanced communications, arts, and sciences, and in so doing have demonstrated that communications is truly the beginning of understanding.” The attraction has always been about communication over man’s history, and it’s been amazing to watch the speed with which it has developed over time. Many Disney guests called for an update over the last two decades, as communication flew forward at sonic speed, making parts of the attraction seem incredibly dated.

Were you able to take a farewell ride on Spaceship Earth? Leave us a comment below about your final ride on this version!