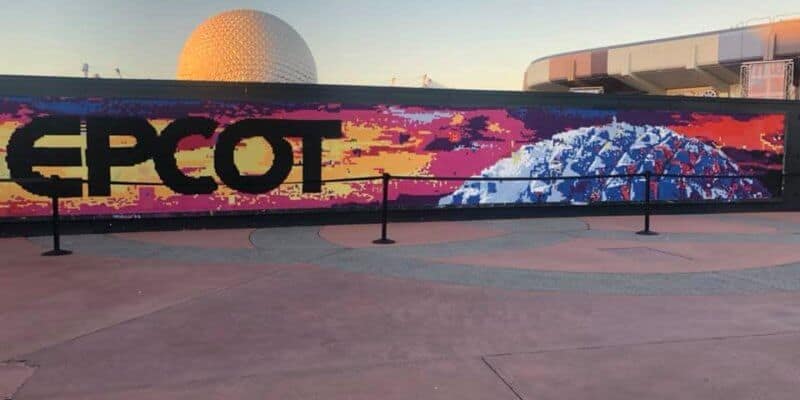 The Walt Disney World’s Experimental Prototype Community of Tomorrow is progressing further and further into its epic revamp, and we are starting to learn more and more about the theme park she is becoming.

Along with a completely redesigned Future World and the introduction of more classic Disney characters, we now have reason to believe that Walt Disney World is giving Epcot an official name change. “Epcot” will now become “EPCOT,” the proper spelling now with all caps.

We have reached this conclusion through observing the design changes in the new logo design,  the marketing for the revamp, the merchandise, and the designs showcased at the EPCOT Experience, which debuted last fall. And given the upcoming events coming soon to the park and the construction walls surrounding areas under refurbishment, it looks like Disney has made the name change official.

In the beginning, Epcot was EPCOT. Or, really E.P.C.O.T. As many Disniacs and die-hard Disney fans know, it was an acronym for “Experimental Prototype Community of Tomorrow.” But Walt Disney’s vision for Central Florida Utopian Community was diluted to a futurist-inspired theme park with its own version of a world’s fair and Spaceship Earth as its centerpiece. After that, the acronym lost its original significance.

The park opened in 1982 under the name “EPCOT CENTER” then it transitioned through the ’90s to just “Epcot,” with only the first letter capitalized and the rest lowercase (formatted like any other park name, such as Magic Kingdom).

Now it appears that Epcot has returned to EPCOT, as a nod to the original name and what Walt Disney World’s second park first stood for. The latest logo design appears not just on all of the construction barricades, but also on every piece of concept art and merchandise from posters and t-shirts to the logo design for the past few Epcot festivals, including this year’s Festival of the Arts.

EPCOT has officially or unofficially used an all-caps name since its 35th-anniversary celebration. Since then, we have seen an updated, all-caps spelling incorporated more and more into the park, now encapsulated in the logo for the EPCOT Experience presented by Walt Disney Imagineering.

Please note we do not take this as an announcement officially from Disney. Disney has constantly used “Epcot” and “EPCOT” almost interchangeably and Disney has not made an official confirmation on the matter. The Walt Disney World website still shows that the theme park is known as Epcot, not EPCOT, but given recent marketing and merchandise, we expect this to change soon.

Did you know: You can take a boat from EPCOT to Disney‘s Hollywood Studios?

Before Disney‘s Skyliner was installed, guests in Epcot could get to Disney‘s Hollywood Studios–formerly Disney-MGM Studios–by boat. , Disney‘s Yacht Club, and Disney‘s Beach Club. The boats so go both ways so you could start the day at Star Wars: Galaxy’s Edge and sail on over to Creperie de Paris for lunch. You can catch Disney‘s Friendship boats at “International Gateway”: The secondary Epcot entrance in World Showcase between the French Pavilion and the UK Pavilion.

Book Your Trip to EPCOT

Are you planning your next trip to EPCOT or any other Walt Disney World theme park? Our friends at Academy Travel are here to help. Backed with years of experience, Academy’s travel agents know what it takes to work with you and create the best possible Walt Disney World vacation for your budget. Click here to learn more and receive your free, no-obligation quote today.

What do you think about the EPCOT name change? Did you always spell it “Epcot” or “EPCOT”? Let us know in the comments!