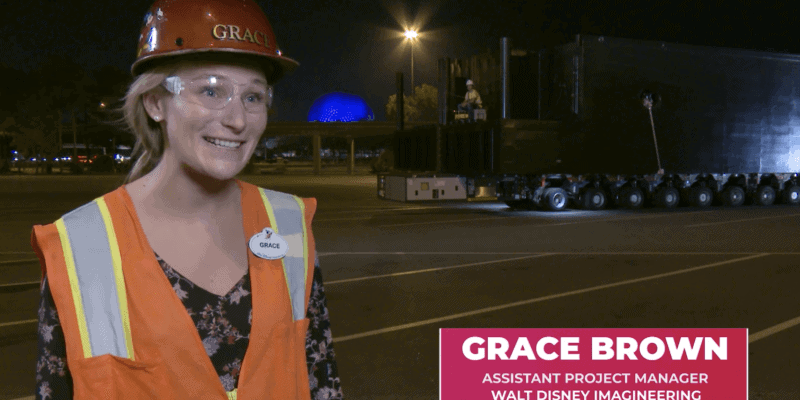 Disney has just revealed new details about the upcoming permanent show that’s replacing Epcot Forever, Harmonious. In a behind the scenes video Disney shares the arrival of one of the huge show barges that will make up the bulk of the new show when it debuts later this year.

In the video, we find out that the show will consist of 5 barges and this one is 30ft wide by 75ft long! Of course, you’d also be safe to say that the other four barges will be around this size, Disney isn’t messing about with these new show barges! These barges will form a stage during Harmonious that they are calling ‘The Compass.’ It looks like this is where we are going to be seeing all of the character projections that have been teased since the very first piece of concept art.

The stage itself looks like it is going to be pretty incredible though I can’t help think that It’s a very odd time to be an Epcot fan at the moment.

Ever since Disney announced Harmonious I’ve had my concerns about Disney characters dominating a nighttime spectacular at Epcot. IllumiNations: Reflections of Earth was just so different from the nighttime shows at the Magic Kingdom and I just hope that this show isn’t just another character projection show with a few fireworks and that it stands out and sends an important message, just as IllumiNations did. Only time will tell but let’s hope the characters flow better in this show over the weird appearance by Aladdin in Epcot Forever currently.

The World Showcase is all about bringing different cultures together and sending a message of hope and peace, Harmonious has a lot to live up to in the eyes of Epcot fans like myself who grew up with IllumiNations!

What are your thoughts on the upcoming Harmonious show? Let us know in the comments below!