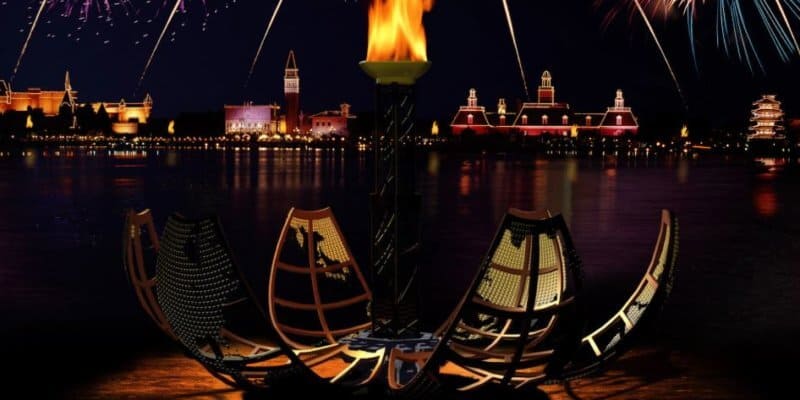 The time has come to gather around the fire to share the light and to share a story. One last time. For nearly twenty years you were the “Goodnight Kiss” to each EPCOT day. Days spent celebrating the wonders of the Earth–whether it be soaring over The Land, diving into The Living Seas, or drinking around the world–ended with you: reflections of Earth.

Guests of all ages, cultures, and levels of inebriation found their spot around the World Showcase Lagoon. There was not a bad seat to be found, but we had our favorites. The Gondola Station in Italy, the Bridge between the U.K. and France, or just at the entrance of the showcase.

You were a marvel for your time. Completely automated with barges navigating the water with pinpoint accuracy. And because you performed on the water, your fireworks could be closer to us than any other spectacular at Walt Disney World. Everybody asked the question “Which do you prefer? Wishes or IllumiNations?”

Through the fireworks, lasers, and passionate music, you connected everyone through the only undebated quality left about all peoples: the instinctual need to tell a story. We literally looked back on Earth spinning in the darkness. Projected on each continent was a brief visual history of the world. Then the Earth opened up and you ignited a fire: the fire of our human spirit.

You were Walt Disney World’s gift to the new millennium. A celebration of the past two-thousand years, everything before that, and everything to come in the next thousand years. Each Christmas you added the call to action: “Let there be peace on Earth and let it begin with me.” Your New Year’s Eve spectacular counted down to midnight by highlighting each nation in the showcase which had crossed the threshold earlier that day.

You got us to stop and reflect on the world with a romantic, joyous, hopeful view in a time where all we are shown is evil exposed, and where we are forced into “disillusionment”. Your story was a celebration of humanity’s progress. But, unfortunately, all stories must come to an end. And it’s time to come together, raise our glasses from the Food & Wine Festival, and say goodbye.

Just know that while this may be our final goodnight and your fire may no longer blaze in the middle of World Showcase Lagoon, the fire still blazes in the spirits of everyone that saw your spectacular and heard your story. We will continue to write that story.

“And though each of us has our own individual stories to tell, a true adventure emerges when we bring them all together as one.”

You gave an entire generation of the world’s children inspiration and taught them with the stillness of the night that now is the time to understand. To reach out and touch tomorrow. Take the future in our hands.

Whether we want to or not, we CAN see that new horizon built on all that we have done. And no matter what anybody says right now, our dreams CAN begin another thousand circles ’round the sun.

We’ll move on with the current of the years.

We’ll go on, moving forward now as one.

We’ll move on with a spirit born to run.

Ever on, with each rising sun, to a new day, we’ll go on.

Goodbye IllumiNations, and thank you.