As Walt Disney World inches closer and closer to reopening, Cast Members are returning to work to be trained on the new safety protocols that will be instituted in the theme parks.

This week, Walt Disney World Ambassadors visited Cast Members training on Test Track at EPCOT, and the Walt Disney World Cast and Community Facebook page shared a picture of everybody in front of the thrill ride praising the team for their hard work:

Some of our EPCOT Cast Members have returned to work and are completing their first days of training to learn new health and safety protocols in preparation for reopening the park. Our Walt Disney World Ambassadors stopped by to recognize their dedication to safety. It’s great to see so many familiar faces! Thank you to the entire team for all you are doing to responsibly prepare for our Guests and fellow Cast Members!

In the picture, all Cast Members are wearing masks and maintaining social distancing.

Across the Pond, Inside the Magic also reported today that Disneyland Paris has begun displaying some of the safety protocols being instituted in their theme parks when they reopen.

EPCOT, along with Disneyland Paris, is scheduled to reopen with Disney’s Hollywood Studios on July 15, 2020. 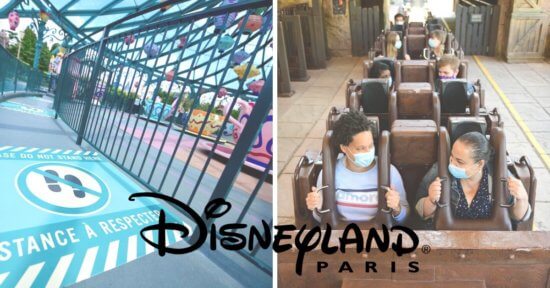 While this visit to Test Track is a happy occasion, there is still some contention among Walt Disney World Cast Members regarding reopening. It follows our recent coverage of two Cast Members sharing their return to work and reporting an overall positive experience. However, Actors’ Equity Association–the union which represents stage-performing cast members–has rejected Disney World’s proposed safety plan.

Despite some mixed feelings among Cast Members, Walt Disney World is still on track to reopen its theme parks with completely booked Annual Passholder preview days at Magic Kingdom and Disney’s Animal Kingdom on July 9, and July 10. As of the publication of this article, Annual Passholders have also completely booked all but three park days in July, and the only park with availability on those three days is EPCOT.

Comments Off on Cast Members Return to EPCOT for Reopening Training