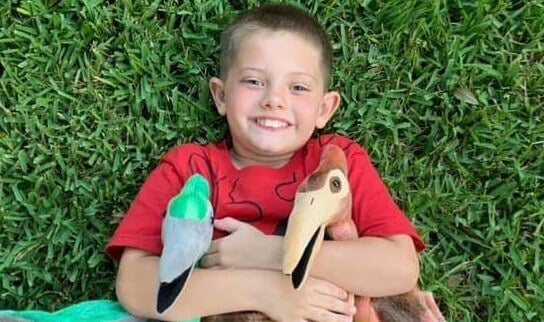 If you’ve ever been to the four theme parks at Walt Disney World in Florida, you know the sight very well: droves of kids lugging around their newest Disney World souvenirs.

And if you’re a parent or if you’ve ever had young kids in your life, you probably also know another sight very well: the look on a child’s face when his newest friend, toy, souvenir, treasure, etc., comes up missing. It’s heartbreaking.

That’s exactly what happened last week to Jacob Davis, who is only six years old, when he visited the parks with his parents. And while there may be a few issues wherein Disney World needs to step up its game, stellar, above-and-beyond customer service on the part of Disney World Cast Members isn’t one of them. In fact, it’s one of Disney’s strong suits, and the story of Ted the Pterodactyl is just one example of that exemplary customer service.

Jacob visited Disney’s Animal Kingdom last week on vacation, and his Disney experience is one the family won’t soon forget. After Jacob had enjoyed the animals and attractions in the park, he chose to use his Disney gift card to buy a green pterodactyl at Dinoland U. S. A. Jacob named the dino “Ted.” He fell in love with Ted almost immediately, and he was pleased with how he used his money.

The next day, Jacob’s family was heading to Magic Kingdom. Jacob adored Ted instantly and loved him so much that he insisted on bringing Ted to Magic Kingdom, not understanding what a very busy place the Magic Kingdom can be. Sadly, Ted the Pterodactyl was stolen while Jacob and his family were on a ride for which they had a FastPass.

Jacob’s mom, Allison, was broken-hearted for her little boy. She was hopeful for a little Cast Member magic, but she wasn’t sure what would happen to brighten Jacob’s spirits.

Allison knew she had to act fast, so when the family arrived back at their hotel, Jacob’s mom went to the front desk to see what could be done to find a replacement for Ted–without the family having to return to Animal Kingdom. Allison shared the story with a Cast Member at the hotel and told her that Jacob had named his dino “Ted” and that they were eager to replace him as soon as possible.

The Cast Member asked Allison to give her a few hours and that she would have a new pterodactyl in the room for Jacob. But neither Jacob nor his mom or his dad could have been prepared for what they saw waiting for Jacob when the family returned to their hotel room at Disney’s Caribbean Beach Resort.

When Jacob opened the door and walked into the hotel room, he found not only Ted the Pterodactyl, but also a friend of Ted’s and a small bound book. As Jacob and his parents flipped through the book, magic seemed to drip from every page.

Two Cast Members, Topher Cortez and Marisa Sullivan, couldn’t bare the thought of little Jacob thinking his beloved friend Ted was stolen–especially not at the Most Magical Place on Earth. So they took it upon themselves to get another pterodactyl just like Ted from Animal Kingdom, as well as another pterodactyl that they lovingly named “Teddy” so that the story of Ted’s magical Disney World adventures wouldn’t be a story in which he was alone throughout the day. Then the Cast Members took the two pterodactyls and photographed them in various different places around the Walt Disney World Resort.

The two pterodactyl friends were photographed just outside of the Dinosaur attraction at Dinoland U. S. A., on a bench in front of lush vegetation at Animal Kingdom and with Daisy Duck. There are even photos of Ted and Teddy at Donald’s Dino-Bash. And of course, it wouldn’t be a magical adventure without a Mickey ice cream bar, which the two were photographed with as they shared it.

In the letter that Ted and Teddy wrote to Jacob, the two dino friends even said they checked out the new Disney Skyliner, just to “see how humans fly.” The two pterodactyl friends even had their photos made with a security officer and a police officer.

Jacob’s mom Allison says that the two employees were so helpful, and she doesn’t even know how to thank them.

“What these Cast Members did, I’ll never be able to thank them enough,” Allison explained. “They saved his belief that Disney is magical and nothing bad could happen there.”

Allison says that since Ted and Teddy returned to the resort hotel room, he has yet to let them out of his sight, for fear they will head out on another adventure without letting him know first.

Little Jacob will turn seven years old on October 25, but we bet his birthday wish has already come true, thanks to the big hearts and quick-thinking of these two employees and the always-special Cast Member magic they shared with Jacob.

Allison originally shared this story of the Disney Cast Member magic on Facebook, which you can read here.