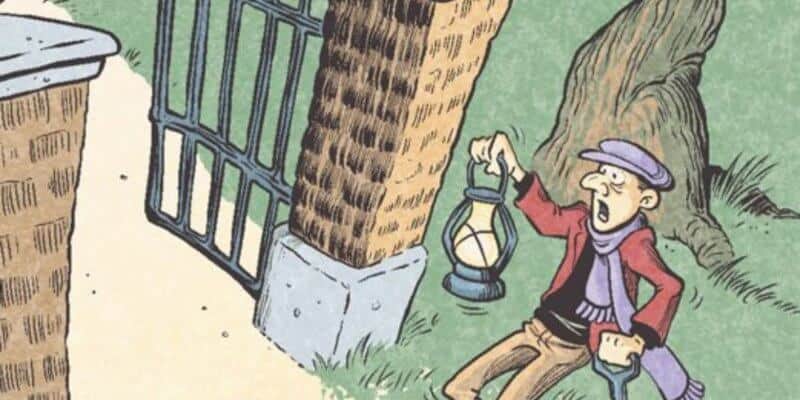 The Haunted Mansion attraction at Disneyland and Walt Disney World is one steeped in both mystery and history.

Its popularity reaches beyond the sometimes lengthy waits in the ride queue. Over the years, the attraction has become a piece of classic Disneyana and even a part of pop culture, to the point that the abode of the grim grinning ghosts even serves as the theme for many young couples’ weddings.

The cleverly-crafted experience designed by Disney’s Imagineers, background painter Claude Coates and character designer Marc Davis (who created the look of villains like Cruella de Vil and Maleficent, among others) has also been the subject of many present-day artists’ paintings, drawings, and other works.

Such is the case of illustrator and cartoonist Vince Dorse, creator of the award-winning comic, “Untold Tales of Bigfoot.” Dorse has a knack for drawing cute animals and monsters kids don’t mind finding under their beds in their closets, and he used his talents to create what he calls a “rideable” poster of the Haunted Mansion attraction.

Attractions designed during the same time period as the Haunted Mansion–such as the Pirates of the Caribbean attraction–have a certain “flow” to them that you won’t find in the spooky homestead of the 999 happy haunts. In the Pirates of the Caribbean attraction, one room flows into the next, and it makes sense, as far as time and space are concerned. But in the Haunted Mansion attraction, you may have noticed that the “flow” from room to room just isn’t there, which isn’t a problem if you’re traveling by Doom Buggy.

But Dorse wanted to create a 2-D poster of the ride that found that missing flow. As Dorse states on his blog, “The [Haunted] Mansion is a kooky collection of spooky rooms, linked together through a series of twists, turns, ramps and drops. It’s kind of difficult to reconcile the interior experience with the exterior facade.”

Dorse goes on to explain that the most difficult task in this project was in determining the best way to link those rooms together in his artwork so that they followed the same sequence as the ride in the parks–all in an easy-to-follow 2-D print that made sense. But apparently, Dorse was up for such a challenge as he was able to do exactly that, as you can see in the full print here:

What began as just a doodle-a-day exercise for Dorse–one in which he hoped to draw a ghost a day with ink on paper until he created a cross-section of the attraction that fans could “ride through” with their eyes–morphed into so much more.

What materialized, however, was a project that Dorse longed to see in color–muted colors, mind you, that would reverberate a bit of a 1970s feel.

Dorse’s friends wanted prints of their own, but that wasn’t the illustrator’s goal, so he dismissed their requests . . . until he took a look at the final inked illustration. It was then that he decided his “nosy” friends might just be on to something.

Dorse decided to create 18″ x 24″ prints of his experiment-turned-masterpiece, and now his friends that hang out at his studio and look over his shoulder are happy to have the Happy Haunts hanging on their walls. (We think it’s pretty cool ourselves!) If you like it and want to know more, you can reach out to Vince Dorse to ask questions about the project and the prints.

Ready for a ride on the Haunted Mansion attraction with no wait time in the queue? Check out this “ride” video put together by Dorse. You don’t even need a FastPass!

What do you think is the draw for Disney fans to the Haunted Mansion? What makes it so popular? Let us know in the comments section below.