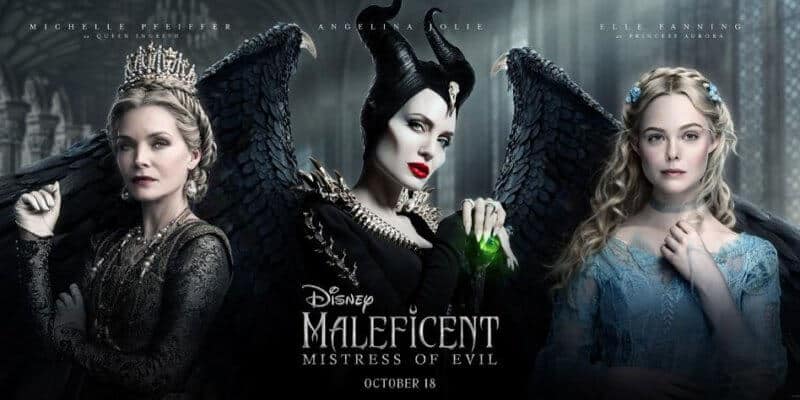 “Maleficent: Mistress of Evil” hits theaters in just a couple of weeks, and fans around the world are gearing up to see the return of their favorite Disney character to the big screen. From the star-studded roster of actors to the amazing costume and set design and the fantastic visual effects, there’s nothing not to be excited about when it comes to the second film in this series (especially if you love Disney Villains and a great story).

Not sure what to expect in the “Maleficent” sequel? Don’t worry! We’re here to catch you up on who’s who so you feel prepped and ready to watch “Maleficent: Mistress of Evil” once it premieres in theaters on October 18.

Of course, Angelina Jolie is starring as Maleficent in the sequel after playing her so well in the first film. In “Maleficent,” Jolie plays the titular role and shows the audience why Disney’s most iconic villain grew to be so vengeful. But by the end of the first movie, we deeply sympathize with Maleficent and her struggles, and we grow just as fond of Maleficent and Aurora’s mother-daughter relationship as the two do with each other.

But in “Maleficent: Mistress of Evil,” Jolie’s character is experiencing a new kind of stress: the possibility that the one she loves most is leaving her. She faces conflicts not only with Queen Ingrith but also with Princess Aurora, and she learns more and more about what makes her so different, even to the point of understanding that she was never truly the only one of her kind.

Elle Fanning picks up right where she left off in her role as Princess Aurora, only this time she’s not as young as she used to be. It’s been over half a decade since the first film premiered, and since Fanning has grown up, Aurora has too. She’s older, more mature, and knows what she wants — to marry Prince Philip. Of course, as you’ve probably seen in the sneak peeks and trailers, this doesn’t go so well for Aurora and Maleficent’s relationship. You’ll have to see the movie to find out how everything works out, but just know that Aurora is more comfortable defying Maleficent in this film than the first.

Speaking of getting married, Prince Philip is Aurora’s betrothed. If you don’t recognize him, it’s for a good reason — this Prince Philip isn’t the same one from the first film. Well, it’s still Philip, only a different actor is portraying him. But he and Aurora are still in love, and he plays a pivotal role in this film: he’s asking Aurora to marry him, and that causes quite the rift between Aurora and Maleficent, to say the least.

Perhaps the most major new character to be introduced in the “Maleficent” sequel is Queen Ingrith, Prince Philip’s mother. While the Disney’s animated version of “Sleeping Beauty” presents Maleficent as a villain and the first film turned that concept on its head, the second film complicates the audience’s perception of both Maleficent and the characters she’s up against, namely Queen Ingrith. The Queen poses a threat to Maleficent: she wants to be Aurora’s real mother. We don’t want to spoil much of this for you though — you’ll have to see the movie to figure out what really motivates this queen.

King John — played by Robert Lindsay — is another character new to this sequel film, but he doesn’t play as much of a role in the movie and tends to take a backseat to the much more impactful Queen Ingrith. Remember that he’s Philip’s father and Ingrith’s husband, and considering that the theme of family is so prominent in both “Maleficent” and “Maleficent: Mistress of Evil,” it’s important to understand this family’s dynamics.

If there’s a new character you have to pay attention to, it’s Conall, played by Chiwetel Ejiofor. Conall is like Maleficent, a horned fairy tempted by dark magic who helps Maleficent to not feel so alone. It is Conall who tells our leading character why the horned fairies and the humans don’t get along and what led to the outcast of Maleficent’s kind. Conall is truly an impactful, plot-driving character.  We won’t spoil the film for you beyond that, but just keep in mind that Conall teaches Maleficent more about herself and her world than she ever expected to learn.

Sam Riley is back as Diaval, Maleficent’s raven shapeshifter. He’s part rave, part assistant, part confidant, and he, like Maleficent, is a parental figure in Aurora’s life. It’s been years that Diaval has watched over Aurora, and he too feels a kinship with her. Just like in the first film, Diaval plays an integral part in the sequel, and he’s one character you won’t want to underestimate.

Would it be a “Sleeping Beauty” retelling without these three fairies? Lesley Manville, Imelda Staunton, and Juno Temple are back as the three fairies who raised and protected Aurora throughout her life. They still keep a watchful eye on her, and even though they aren’t the characters who most fans are drawn to, the “Maleficent” sequel wouldn’t be the same without Flittle, Knotgrass, and Thistlewhit.

Which character are you most excited to see on the big screen in “Maleficent: Mistress of Evil”? Let us know in the comments!

Comments Off on Who’s who in Disney’s “Maleficent: Mistress of Evil”