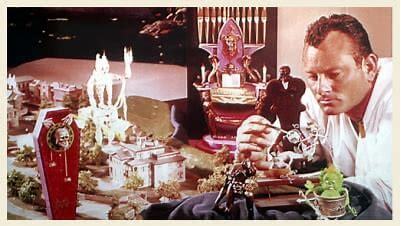 By now, most of you foolish mortals know that we’re honoring the 50th anniversary of the Haunted Mansion attraction at the Disneyland Resort in Anaheim, California, and there’s quite a celebration to mark this macabre and momentous occasion.

Disneyland has been gearing up for the occasion for several weeks, and one of the most interesting spectacles to have appeared at the Happiest Place on Earth is “Happy Haunts Materialize,” a historic exhibit honoring nine of the men responsible for the creation of the spooky illusion-filled attraction that cost $7 million to build.

All but one of those brilliant men have passed away since the first doom buggy made its way through the creepy Haunted Mansion. Carlsbad, California resident Rolly Crump was instrumental in the development of one of Disneyland’s most successful attractions. No, really: he was the brains behind the 20-foot-tall ominous organ played by ghost Victor Geist in the Ballroom scene of the ride. Crump also helped design many of the happy haunts in the ballroom as well.

He is even honored inside the ride. One of the Phantom Five–the 5 busts singing the ride’s “Grim Grinning Ghosts” song–is named Rolo Rumkin, a nod to Rolly Crump.

Crump worked for The Walt Disney Company for over 18 years, but he says the best part about his time with Disney was during the 1950s and ’60s when he got to build a friendship with the chief proprietor himself, Walt Disney.

“He was a beautiful human being who was very creative, very humble and he cared about the people who worked for him,” Crump says of Walt. He proclaims he’s on a mission to let others know how great Walt really was.

Crump has spent time looking back on one of the most famous attractions in Disneyland’s history. Walt Disney originally wanted to build a Victorian mansion on Main Street that would serve as a haunted mansion, but when the park was under construction, the idea was shelved. Then in 1957, Walt asked animator Ken Anderson, as well as Yale Gracey and Rolly Crump, to come up with some ideas for a haunted house that would be part of Frontierland.

Then in the 1960s, a 3-story Victorian structure was finally built in the New Orleans Square area of Disneyland. It was inspired by the Stanley Lydecker house in Baltimore, Maryland. It would one day house the Haunted Mansion attraction, but for years, it sat empty (except for some of the 999 happy haunts that began to take up residence there) while Walt focused on other projects within the park.

Additionally, Crump designed the tiki gods and totem poles inside the Tiki Room attraction, and he was also the key designer for attractions created for the 1964 World’s Fair, such as the Carousel of Progress.

He would then go on to create the iconic clock in the It’s a Small World attraction.

In 1996, Crump officially retired from his post of animator-turned-Imagineer. He was inducted as a Disney Legend in 2004, and in 2009 he was honored with a window and a sign on Main Street U. S. A.

“My mind still tumbles off into never-never land when I think about all I’ve had the privilege to do,” the 89-year-old Crump says. “I’ve had the most gorgeous life.”

Do you have a favorite Imagineer? What contributions did he or she make to the Disney Parks?