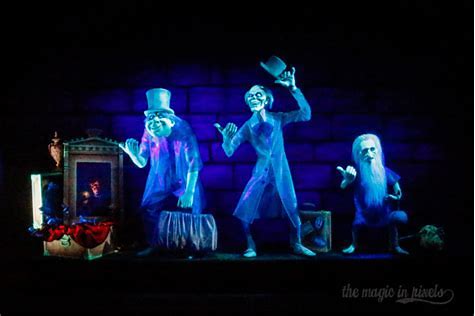 Welcome, foolish mortals, to the 50th anniversary of the Haunted Mansion attraction at Disneyland.

And in memoriam of that momentous and macabre celebration, we’d like to get you up close and personal with 13 of the most famous of the 999 happy haunts. Haunted Mansion fans know these haunted mansion ghosts are why we can’t ever get enough of this iconic attraction.

Serpents and spiders, tail of a rat, the sounds of the spirits go ‘rat-a-tat-tat’.  Madame Leota is the head of everything. Literally, she’s a head inside a glass globe that floats high about the attraction in the dead center of the séance room. She serves as medium between our world and the spirit world. Her room is encircled by multiple musical instruments used by the spirits to let us know they have “received our sympathetic vibrations.”

Next is the Hatbox Ghost, perhaps one of the eeriest and most foreboding spirits in all of the attraction (except for Constance, but we’ll get to her in a minute). On first appearance, he seems the neatly dressed happy haunt–a 3-piece suit and a top hat–but there’s a reason he always wears his top hat: he keeps his own head in the hatbox he carries, except when he doesn’t. Yes, the Hatbox Ghost can carry his head in his hatbox or put it back on his neck. Either way, he’s one of the most grim of the grim grinning ghosts and one of the symbols of the attraction as a whole.

Did you know that the 5 singing heads (what is it with heads and the Haunted Mansion?) have names?  Rolo Rumkin, Uncle Theodore, Cousin Algernon, Ned Nub, and Phineas Pock are better known by their band name, “The Phantom Five.” The five busts form a quintet and sing the macabre melody that has become famous over the years, “Grim Grinning Ghosts.” (You know, the song with all the words that rhyme with “materialize”?)

Related: 5 Ways The Haunted Mansion and Tower of Terror Are Tied Together

You may be shocked to learn that the 3 Hitchhiking Ghosts also have names! Ladies and gentlemen, boys and ghouls, say hello to Ezra Beane, Professor Phineas Plump, and Gus. But don’t get too friendly; these moochers are always looking for a ride home–to your home, that is! The sappy spooks even resort to jumping into doom buggies with unsuspecting Guests! Mr. Beane is the tallest of the 3 loafing ghosts. Phineas Plump was a snake oil “dealer” in his mortal, corruptible state. (He apparently thinks he can make some deals in the afterlife; just look how he carries that carpetbag with him!) Poor Gus, the short-statured, friendly looking spook, spent his mortal life behind bars for a crime he never committed. His silly expression lets us know he hasn’t the mind of a criminal.

Constance Hatchaway, the bride in the attic, was quite busy in her mortal state. She was a bride 5 times over in her corruptible state. Why so many husbands, Constance? Sadly, each of her 5 spouses met his eerie demise at the hands at this less-than-blushing bride. You can see Constance in the creepy attic. The attic is laden with dust, spiders (we’re sure) and decorated with portraits of Constance and her better halves, each one missing his head. (Again with the heads!)

Throughout the attraction, Guests are, um, privy to the silencing sounds of an organ being played. The happy haunt responsible for those delightfully devilish sounds is none other than Victor Geist. The sinister sounds of the organ are piped from the ballroom of the Haunted Mansion. In the ballroom, stop in for a different kind of unbirthday celebration, complete with a long dusty table, cake and 13 candles. There you can see Victor, perilously piping his ominous organ sounds throughout the mansion, as if inviting us to come visit and never leave.

Last (well, actually first) is the Ghost Host. He’s the one who talks to Guests throughout the attraction. He doesn’t treat them as honored guests, but rather as ignorant, simply because of their living state: the mere fact that guests of the Haunted Mansion are mortals makes them “foolish,” a name he gave to the very first visitors to the mansion–and a name that has stuck to this day. (Why so judgmental, Mr. Ghost Host?) Perhaps he is rather welcoming after all: “Welcome, foolish mortals,” he bodes, and he’s kind enough to remind us that the mansion is home to 999 happy haunts, “but there’s always room for one more!”

There’s always room for one more at Disneyland! Are you planning to visit this weekend to celebrate the 50th anniversary of the swingingest wake on earth? Would you consider yourself the biggest fan of the Haunted Mansion attraction? Tell us why in the comments below!