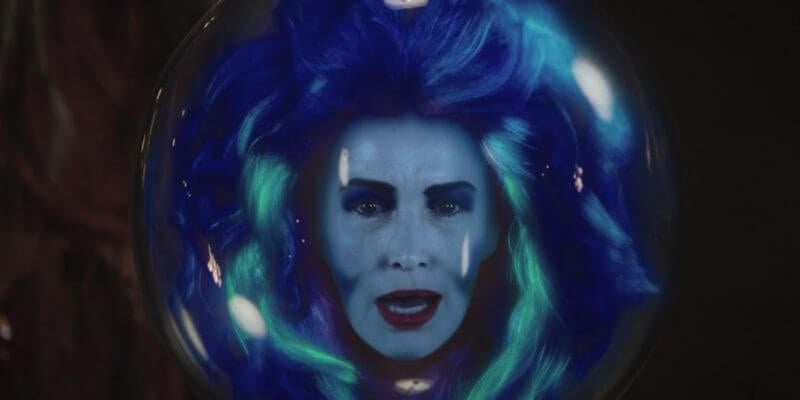 Last week we conjured up a creepy cool casting announcement and character cameo materializing in an episode of Disney’s alternate realm known as “Once Upon A Time.”

Suzy Joachim gave a truly glowing performance as the infamous Mansion medium, but technically that was not Leota’s inaugural introduction into the series… Though uncredited (and pretty much unseen), Madame Leota actually accomplishes arcane arts in a prior episode, helping the coven of witches release of Drizella and teleporting them to freedom (Season 7, Episode 10 – “The Eighth Witch”).

The Spirits have spoken: SPOILERS AHEAD!

Beloved floating phantom of the Haunted Mansion, Madame Leota, is finally given face time in this episode.  Holding court from within her own spherical realm, Leota’s disembodied head is all that remains of the spirit who refuses to cross over. Strange, frightening, and forever familiar sounds can be heard from behind the curtain within Memento Mori, Madame Leota’s enchanted, hidden shop. As spoken in the dark Disney attraction, so similarly spieled from behind the curtain, an immortal incantation guides our heroes to the familiar (but not floating) face of Madame Leota herself. From there, “Once Upon A Time” twists a few more memorable words. “This chamber has no windows and no doors” transforms into a trap with a terror-ific twist. Borrowing another line from the Ghost Host himself, “There’s always my way,” reworked the famous final stretch room reminder into an unexpected attack. Aside from the deliciously dark nod to the Haunted Mansion with familiar phrases, Leota’s lines and paranormal presence are somewhat lacking. With an obvious omen of death and smirk, her time in the episode fades quickly, as she vanishes with her accomplice after the attempt to return to the realm of the living is thwarted.

Including references to this respected resident of the retirement home for ghosts adds a breath of un-life to the series’ final season. Making that reference a relevant nod to Liberty Square’s Haunted Mansion corner of Walt Disney World by including the relatively recent addition of a mansion merchandise shop known as Memento Mori was brilliant, right down to including the shop’s signage. Will the malicious medium return for another appearance in the final few remaining episodes of “Once Upon A Time?”  For that, we’ll need a crystal ball to know for certain.  However, as things stand now, the doorway into to the smoldering sanctum of regions beyond appears to be open. Source and images: Once Upon A Time Wikia, YouTube