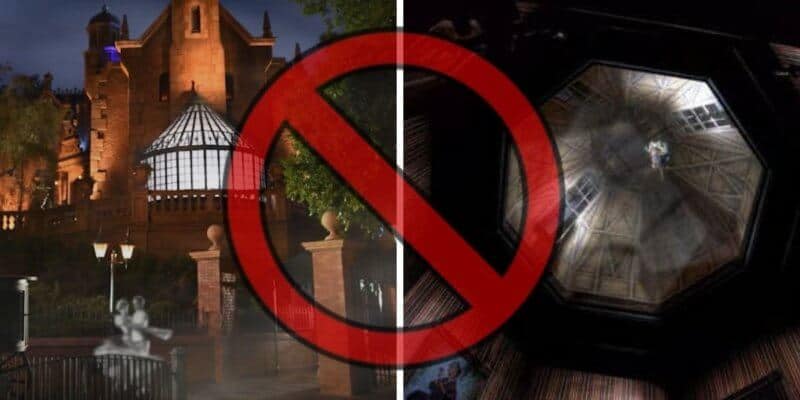 With the news of both Walt Disney World and Disneyland retheming the popular attraction, Splash Mountain, from the controversial Song of the South to the beloved The Princess and the Frog, it is sparking ideas and conversations between fans around other attractions.

One conversation is around the retheming of the popular Adventureland attraction — The Jungle Cruise. But other fans are starting to bring up a specific scene in a different Disney ride — Disney’s Haunted Mansion.

The Haunted Mansion is a popular attraction located in both Walt Disney World and Disneyland. The popular dark ride takes guests through a mansion of haunted characters while riding aboard a Doom Buggy. The spirited Haunted Mansion adventure will be guided by the “disembodied voice of the Ghost Host” as he is your private tour guide “through the cadaverous realm of an eerie haunted estate, home to ghosts, ghouls and supernatural surprises.” Beware of hitchhiking ghosts!

Disney World describes this attraction as “Glide past a casket-filled conservatory, Madame Leota’s chilling séance room and a ghostly graveyard of singing specters as you attempt to find your way out. Beware of hitchhikers—these phantom pranksters may follow you home.”

The specific scene that is now getting a lot of attention is the hanging body scene. On a recent Reddit thread, one Disney fan sparked the conversation of this scene which takes place in the stretching room inside the Haunted Mansion at both Magic Kingdom in Walt Disney World and in New Orleans Square in Disneyland park:

No seriously. If we’re talking about the most overtly offensive scene in a Park attraction that could pretty easily be changed, it’s this scene in the stretching room. You all know it. The one where the ghost host says “Of course, there’s always my way” and flashes to a hanging body.

Why is this problematic?
A) It trivializes Suicide as a joke.
B) It’s gruesome
C) It features a noose, which ties in to lynching.

I’m not joking here. I do think this should at least be up for consideration, as it would only take a small script rework and a removal of the lighting flash that makes the body visible.

This has gotten a lot of response from Disney fans everywhere — Some agreeing while others say to just leave it alone:

No. It did raise my radar the first time I saw it. But there was no effort to change these things at the time.

One Reddit user and Haunted Mansion fan tries to explain why this scene is so important and why it takes place in the first place, writing:

He’s taunting us, seeing what will make us crack and join in with the rest of the ghouls after all there’s room for a thousand.

The sound effects insinuate that its not the Ghost Host opening up the exit, it’s a fellow guest running through the wall in fright. So I assume he wanted it to be quick and dirty.

But I don’t think it was ever the intention to think about what the Ghost Host’s motivations, any more than the motivation of the submarine voyager captain in Tomorrowland.

One comment, however, had an idea of reimagining the scene without completely removing it. They write:

Btw, if it really was so offensive to the masses, they don’t need to change the script. They could just not light the body. The script isn’t obscene in any way. It’s suggestive, but hear it as you want. Maybe “there’s always my way” is referring to the front door if you don’t light the body.

What do you think of the hanging body scene in Haunted Mansion? Let us know in the comments below.