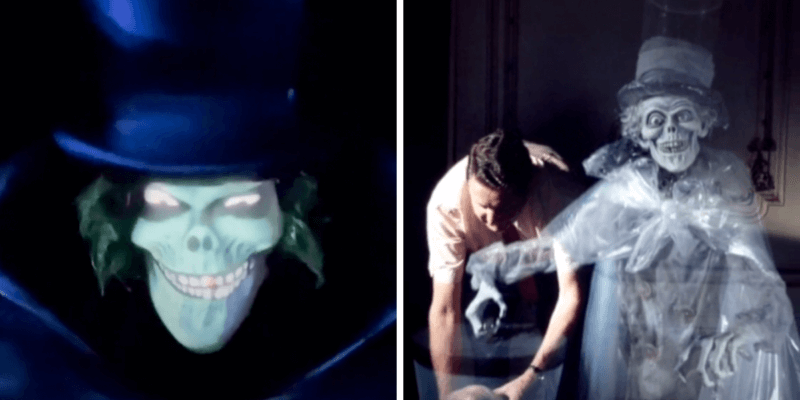 Described as “a cloaked figure with an evil, grinning face” in The Story and Song from the Haunted Mansion, Hatbox Ghost stands alone just outside the Bride’s attic. Holding a knotty walking stick in one hand and an extremely large hatbox in the other, Hatbox was quite a legend despite his spooky disappearance and celebrated reappearance at Disneyland’s Haunted Mansion.

Finally reinstated into Disneyland’s New Orleans Square Haunted Mansion a few years back, The Hatbox Ghost is a bone-chilling reminder of Disney’s ability to materialize a ghost…but does this spooky specter work alone?

Once Disney Fans and “tour” guests at Disneyland’s Haunted Mansion ride past Constance Hatchaway (more about her proximity to Hatbox later), they will have the Doom Buggy in front pass to the left and suddenly, the Hatbox Ghost will appear. Brilliantly lit in blue, Hatbox appears whole, with skeletal arms outstretched.

As riders pass on the Omnimover, his head vanishes from his shoulders and reappears inside the hatbox, with his top hat floating above the space where his head should be. As if by true magic, Hatbox’s head wispily fades back into its original position a second later. An uncredited Corey Burton provided the sinister laugh, according to Haunted Mansion Fandom.

In 1969, the original animatronic was similar to the ballroom ghosts seen in the dining room, as Pepper’s Ghost method was utilized to bring Hatbox to life (after death?). While Hatbox was featured in press photos, on merchandise and in books, he was hastily removed and was feared to never return. It was rumored that he too scary for Guests, but that wasn’t the case at all, as shared by the Hatbox Superfan site, theHatboxghost.com:

One rumor circulated that he as so scary, Disney received so many complaints they had to remove him from the attraction. While this makes for a great story, sadly, that was not the case. The real truth was that the disappearing/reappearing head effect just didn’t work well enough. The Imagineers tinkered with his effect over the course of a few weeks, or even months, but could never acheive their desired result. Because of this, the Hatbox Ghost was taken out of the mansion for good.

The Hatbox Ghost’s unannounced and seemingly mysterious vanishing made him an instant favorite of Mansion fans everywhere. Doom Buggy riders were ecstatic to see the grim grinning ghost return in 2015, with the help of new technology and lighting.

Disney Parks took to TikTok to share just a tidbit of Hatbox’s history, from his original 1969 self to his newer 2015 high-tech reincarnation.

The Hatbox Ghost. A legend here at the Haunted Mansion.

His own head vanishes from his body and mysteriously reappears in his hatbox.  First seen in 1969, on the opening day of the attraction, the technology wasn’t quite ready for this bone-chilling effect.  In 2015 Imagineers were able to bring this phantom back to life.

The Hatbox Ghost and Constance Hatchaway

Today, Hatbox Ghost stands on the balcony just outside the attic (some believe you are plummeting to your death, as Constance Hatchaway and Hatbox are the first ghosts to acknowledge your presence). While Constance hacked her husband’s heads off for years without Hatbox, there seems to be an eerie connection between the two of them.

Next to the Hatbox Ghost are several hatboxes that very well may hold the remains of Constance’s husbands’ heads! Occasionally littered throughout the attic scene, hatboxes may hold the heads of previous lovers. Another theory? That Hatbox is indeed one of the husbands! Lastly, perhaps the Hatbox Ghost is just an assistant of Constance’s…we just hope we see him helping out at Magic Kingdom one day!

What do you love about The Hatbox Ghost? Leave us a comment about one of the 999 happy haunts below!