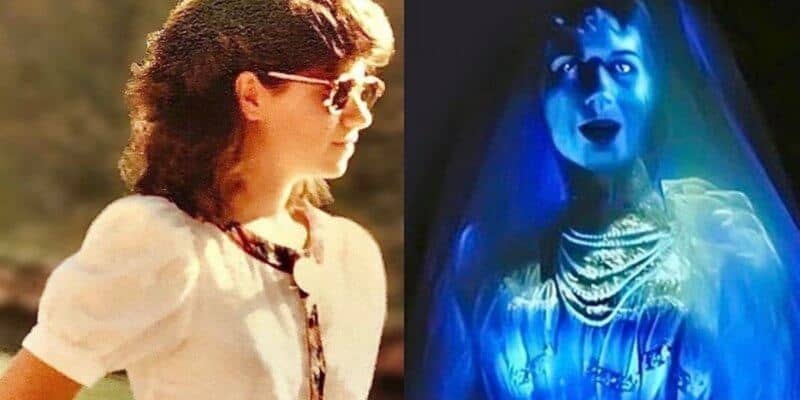 Disney fans all rejoiced (including myself) as Walt Disney World celebrated the reopening of The Tomorrowland Transit Authority PeopleMover on Sunday. For many Disney lovers who return to this park, this is one of the most popular and most loved attractions in Walt Disney World. So my question is, will Disney Imagineers return this family favorite attraction in Disneyland?

While we all ponder that question, let’s look at some rare footage that the Haunted Mansion Bride voice actress, Kat Cressida, shared recently of a ride that once replaced Disneyland’s PeopleMover.

Kat Cressida is best known for her voice as Constance Hatchaway, the Haunted Mansion Bride, and has even worked as a Cast Member for Storybookland in Disneyland Park. She recently shared a vintage video of Rocket Rods, an attraction ride that replaced the PeopleMover in Disneyland from May 22, 1998 until September 25, 2000.

For those who are unaware of this Disneyland attraction, as per Disney Parks Fandom:

Rocket Rods was a three-minute futuristic transportation ride formerly located at Tomorrowland in Disneyland Resort. The ride was part of the park’s 1998 New Tomorrowland phase and was located on the former PeopleMover track.

The whole purpose of the attraction is to make people believe in the futuristic transportation being brought thousands of years before its creation.

This week marked the anniversary of its closing date. Check out this amazing rare footage of Rocket Rod speed down the PeopleMover tracks as Cressida shared on Twitter:

MAN he woulda LOVE THIS one Flushed face

Tho called ‘failure’-
it IS #IMAGINEERING MAGIC!

MAN he woulda LOVE THIS one ?

After Kat Cressida posts on Twitter what she calls Imagineering Magic, many Disney fans responded to this once-forgotten ride. KBrew or (@kbrewFL) on Twitter was super intrigued as they write:

This looks so much fun. Why did they get rid of it??

Enrico Pallazzo (@ThemeParkUmpire) shares some good insight on why Disney Imagineers second-guessed this Disneyland attraction as he states:

Rocket Rods was a great idea in concept, although unfortunately (1) meant the removal of the PeopleMover (2) had to be designed in the constraints of the existing track limiting the experience (3) the structure of the track support wasn’t design for the lateral forces

Rocket Rods was a great idea in concept, although unfortunately (1) meant the removal of the PeopleMover (2) had to be designed in the constraints of the existing track limiting the experience (3) the structure of the track support wasn't design for the lateral forces https://t.co/m2VMSwWJNj

Another Twitter fans named @1923MainStreet wanted to share with his fans this rare video of this quicker moving PeopleMover ride stating,

American Actress Kat Cressida is well known for many voice characters including the cooky Dee Dee in Cartoon Network’s  series Dexter’s Laboratory and voices many video games including The Wolf Among Us. For Disney fans she is known as the voice for the Bride in The Haunted Mansion at both Disneyland Resort and Walt Disney World Resort.

The Ghost Bride Story in the Haunted Mansion is very eerie as Wikipedia describes,

During the 2006 upgrades at Disneyland, the Bride was given a name, a new look, and a backstory. In the late 19th century, Constance married—and murdered—at least five wealthy men and inherited their fortunes. Her ghost utters sinister variations on classic wedding vows as a hatchet materializes in her hands. The visible beating heart from the previous versions of the Bride was not carried over to Constance, but its audio remains on the soundtrack.

While much of Constance’s story is left to the imagination, there are some hints in the newly decorated attic that give guests some insight into the character. A series of wedding photographs can be seen among various gifts and ceremonial trappings, and as guests pass each photo the heads of Constance’s former grooms disappear while the number of pearl necklaces around Constance’s neck grows. In the last photo, Constance holds a rose while posing next to her groom George Hightower.

This echoes the portrait (in the stretching room) of a much older Constance holding a rose as she sits atop the tombstone of her late husband George, whose stone bust has a hatchet lodged in its head. (In an early attraction script, the widow in the stretching portrait was named Abigale Patecleaver.) Though Constance’s ghost manifests as a young woman, she apparently lived to see old age. It has been speculated that the Hatbox Ghost was one of Constances’ murdered husbands, or possibly her accomplice in the crimes.

Constance was later installed at Walt Disney World’s Haunted Mansion during the 2007 refurbishment, though considerable work was done on her Floridian counterpart (including utilizing different video footage and switching to a single projector instead of two at Disneyland).

The performance model of Constance is Julia Lee while she is voiced by Kat Cressida.

I personally agree that this ride may have been a good idea at the time, but having a PeopleMover that allows Guests to relax and enjoy a ride in Disneyland Park again is needed.

Walt Disney World Guests are very lucky to have a ride that takes them behind-the-scenes and lets them enjoy the sites of Magic Kingdom. I think many of us PeopleMover fans can only hope and dream that Disneyland revamps their once loved PeopleMover again. Or maybe this video sparked some Rocket Rod fans to want to ride this instead. Regardless, I am excited to see what Disney Imagineers come up with next!

What do you think of Rocket Rods? Would you want this ride to return, or bring back the PeopleMover to Disneyland Resort? Let us know in the comments below!

Do you need help planning your next Disney Adventure? Our friends at Academy Travel are EarMarked Diamond!