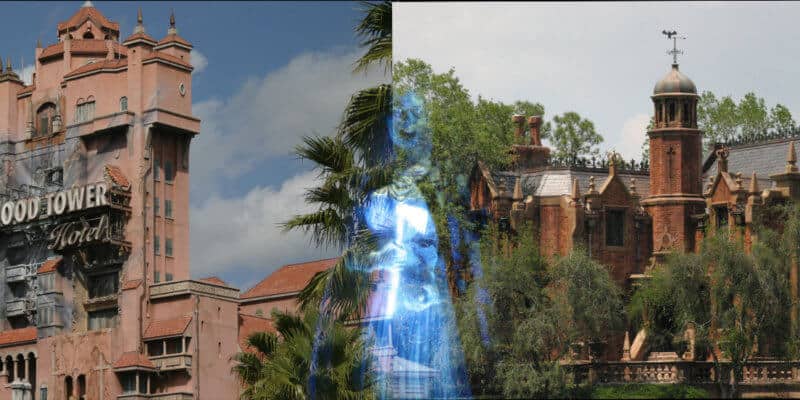 Peer beyond the veil of creepy coolness and it seems these two dark delights are actually tied together in several ways.  From simple similarities to one whopper of a relationship revelation, below we’ll explore the connections between these two infamous attractions. 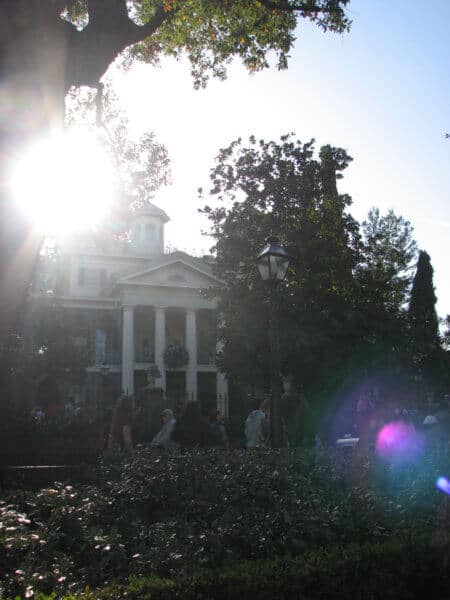 Haunted house attractions owe much to Disney. From the creepy-cool cartoons to a haunting host of delightfully dark rides, the Walt Disney Company set the theme park bar for boo.

Two giants in this apparent after-life arena not only manage to thrill visitors, but they are also eternally bound together via several similarities and relations. 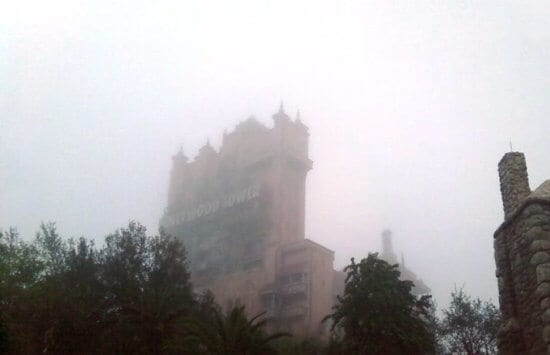 How the Haunted Mansion and Tower of Terror are tied together

Disney’s Haunted Mansion appears in all but one of the company’s theme parks.  Each incarnation looms over a different land at their respective Disney park.  Though the Mystic Manor version in Hong Kong Disneyland relies on a much different storyline. The same can be said for Tokyo DisneySEA’s version of Tower of Terror – The attraction located there is better known as Hotel Hightower, built by one Harrison Hightower III. (Remember that name?)

“Snile don’t Smarl!” That obscure comment erupted from Phyllis Diller when The Mike Douglas Show was airing several episodes from Florida’s Magic Kingdom.  In this case, the retort was directed at one of the grim-looking butlers a Liberty Square’s Haunted Mansion.

Rarely does one of the Mansion’s butlers or maids crack a smile. Of note, and not as sinister as her sister attraction, Tower of Terror’s bellhops rarely smile either. Thus, grim grin-less attraction hosts/hostesses establish the second entry in this conjoined comparison. 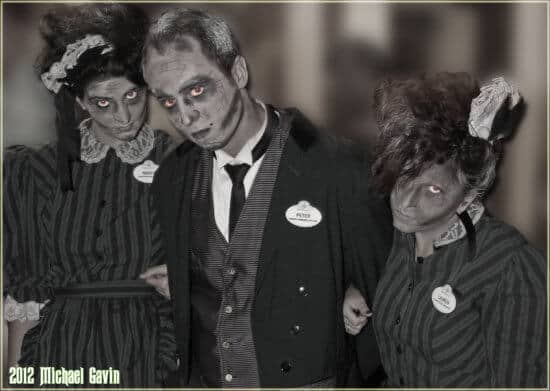 Whereas the (barely?) living attraction attendants keep their smiles on the inside, both attractions host several grim grinning ghosts.

Each with its own eerie environment, Mansion and Tower both appear to be very haunted. From the pale blue, ill-fated hotel guests vanishing and reappearing in the hotel’s service elevator to the 999 happy haunts at a particular ghostly retirement home – spirits spell out the third element of togetherness. 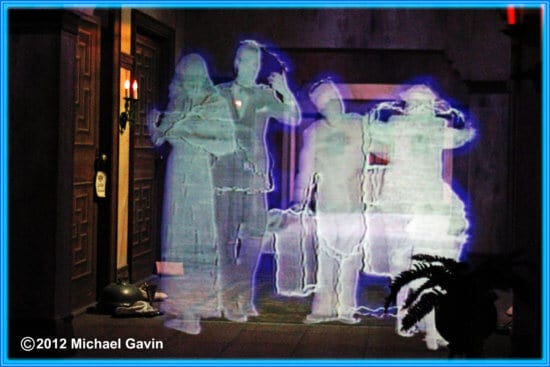 A familiar voice of one spirit, in particular, belongs to the same person. Kat Cressida (Jessie/Toy Story) gave her very distinct and young voice to the Little Lost Girl haunting the Tower of Terror thrill ride.

Seen clutching a misdated stuffed Mickey Mouse her haunting rendition of “It’s raining, its pouring” echo through the attraction. Not to be outdone, the Haunted Mansion’s resident attic bride, also relies on the same actress for her ominous comments at several of the ride’s locations. 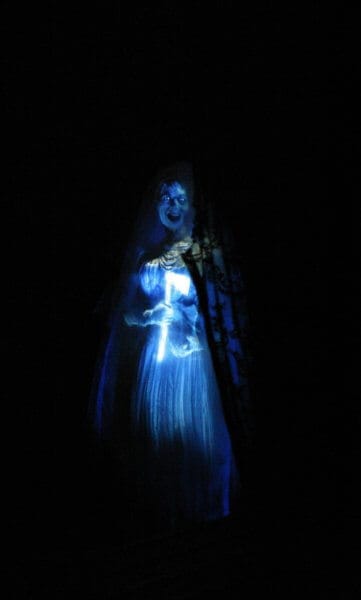 Our last look into the eerie elements bringing the Haunted Mansion and Tower of Terror together is a bit more focused.   For this curious case, only Japan’s version – Hotel Hightower – shares the link. Or rather, should we say, relationship?

For this relationship revelation, we have Ian “Right Guard” Janosko to thank.  His quick detective work prompted perfect questions when the spirit of Constance Hatchaway (while she was greeting guests from the lawn of the Liberty Square Haunted Mansion – see video below).

Ian, a cast member at Walt Disney World, explains it like this:

Gracey Mansion was at one time owned by George Hightower who unfortunately became entangled with Constance Hatchaway, who of course did away with her previous husbands and George as well. Geroge, according to Constance herself when I spoke to her at a Disney Vacation Club Moonlight Magic Event, confirmed that George Hightower was related to Harrison Hightower III, hotel mogul and adventurer who built Hightower Hotel, using his family’s mansion as its base, in New York City. Harrison seemed to have just about as much luck as George, since he vanished on New Year’s Eve 1899 having insulted Shiriki Utundu, an African Idol he stole from the Mtundu Tribe, which caused the elevator to his personal penthouse on the top floor of Hotel Hightower, to crash and Harrison to disappear from the Earth! 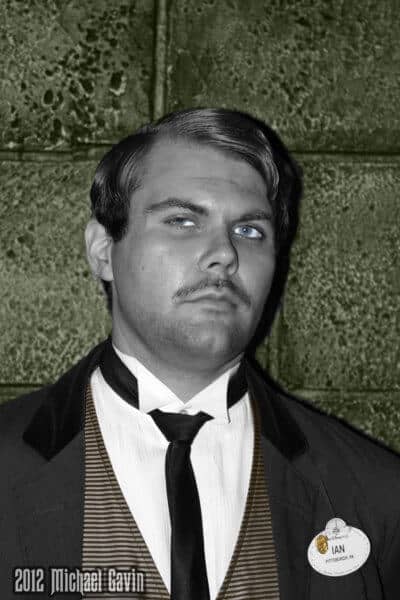 Big thanks to Right Guard for sharing his brilliant detective work and spawning this collection of coincidences.  One of Ian’s adventures included time as a butler at the aforementioned Mansion.  His exploits can be found at The Society of Explorers and Adventurers (S.E.A) Facebook page and on his YouTube page.

On a personal note, as a former Tower of Terror bellhop, this particular topic shakes the cobwebs of what passes for my mind bringing forth hauntingly happy terror attraction memories of time spent at the Hollywood Tower Hotel (as well as a brief Grad Night stint at the Mansion in 1985). 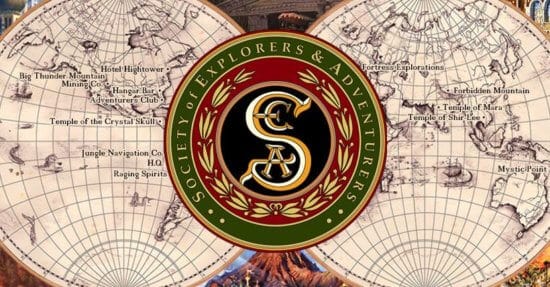 What do you think? Are these two terror-ific attractions tied together on purpose or is this just a Twilight Zone inspired coincidence?