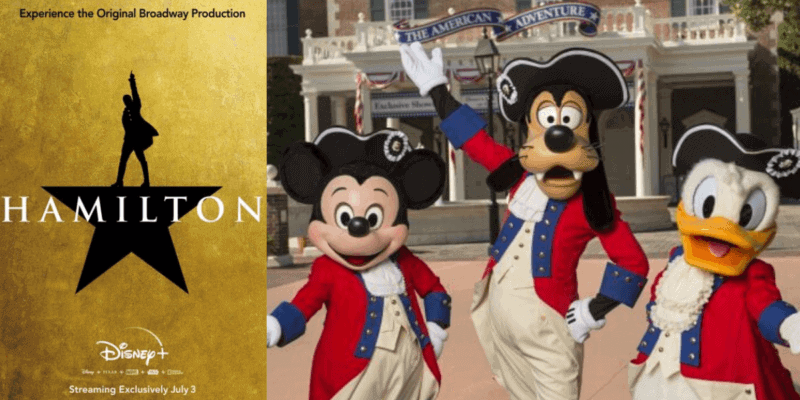 The news first broke in February 2020 that The Walt Disney Company purchased the global rights to Lin Manuel Miranda’s Broadway masterpiece, Hamilton. Miranda himself appears to be on a quest for the coveted title, Disney Legend. Beyond selling the rights to his musical, the man wrote the songs for Moana, starred in Marry Poppins Returns, and is currently working on the music for another animated feature, among other roles he’s filled with Disney.

But as we get set to watch a full-length, live-capture filming of Hamilton with its original cast on Disney+, one could also see the potential building for some slight retheming at Disneyland and Walt Disney World.

Disney has the perfect opportunity to further collaborate with Lin Manuel Miranda and put a Hamilton spin on Liberty Square, and the Hall of Presidents at Disneyland and the Magic Kingdom, as well as the American Adventure Pavilion at EPCOT.

With Splash Mountain getting rethemed to The Princess and the Frog, and groups of Disney fans moving for changes to other classic Disney Parks attractions, could a Hamilton-ized Liberty Square or American Adventure be brought into the conversation?

Related: Is a Lack of New Content on Disney+ Why “Hamilton” is Arriving So Quickly? 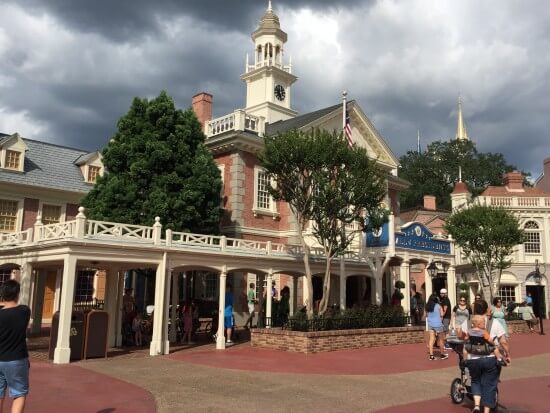 Imagine, you just get out of the Haunted Mansion, and are starting to walk through Liberty Square back to the central hub, when a group of Cast Members in Colonial Gear comes out, gather by the Liberty Bell and start sharing stories from American History Hamilton style. (Seriously, forget about the Muppets. Imagine what a Hamilton-style telling of Paul Revere would be like.) Then you go to dinner at Liberty Tree Tavern and see a live dinner show.

Or you’re taking a lap around World Showcase at EPCOT and as you reach the host pavilion, The American Adventure, and you see a Hamilton group sharing the same space as Voices of Liberty. Or perhaps even a PG-13 rated summary of the show on either stage.

Disney letting the American History focus points of its parks be influenced by Hamilton could bring a much-needed update to those areas, increase the level of immersion, and reinvigorate interest in American History as Walt Disney intended to from the beginning.

Lin Manuel Miranda could also step into an Imagineering role of sorts and be involved with the shows himself. Growing up a Disney fan himself, this writer is confident Miranda would not throw away his shot to put his mark on Disneyland or any of the Disney parks. In fact, there is no doubt he would jump at the opportunity.

Here’s the problem. There are certain liberties that Lin Manuel Miranda took in telling the story of Alexander Hamilton sparked harsh criticism from those who prefer a classic and traditional style to American History. The traditionalists find sanctuary right now in Disney’s expositions of America at Liberty Square and the American Adventure Pavilion. If Disney were to include Hamilton-inspired shows, they would have to share the space with the more traditional shows already running.

But Walt Disney Imagineering has never been one to shy away from retheming or ‘plussing’ attractions. From adding Disney IP into “it’s a small world” and eliminating the Bride Auction scene in Pirates of the Caribbean, to theming Disneyland’s Tower of Terror after Guardians of the Galaxy, Disney has stood by the changes its made to the attractions.

While announcing the changes destined for Splash Mountain, Disney said the following:

The approach to retheming or “plussing” attractions (as Walt Disney referred to it) begins with Imagineers asking the question, how can we build upon or elevate the experience and tell a fresh, relevant story? It’s a continuous process that Imagineers are deeply passionate about. And with this longstanding history of updating attractions and adding new magic, the retheming of Splash Mountain is of particular importance today. The new concept is inclusive – one that all of our guests can connect with and be inspired by, and it speaks to the diversity of the millions of people who visit our parks each year

Disney has released no statement that any Hamilton retheme has even been considered. That being said, it could be an interesting addition to Disneyland and Walt Disney World. But after watching the Enchanted Tiki Room, we understand how making modern updates to a timeless attraction can backfire drastically. We can only hope Disney Parks at least considers making the shows.

6/30/20 – This article has been updated since its original publication.

What do you think? Can you see Disney giving Liberty Square or The American Adventure Pavilion a Hamilton twist? Do you think they should? Do you think the changes would be better received at Disneyland or Walt Disney World? Let us know in the comments!