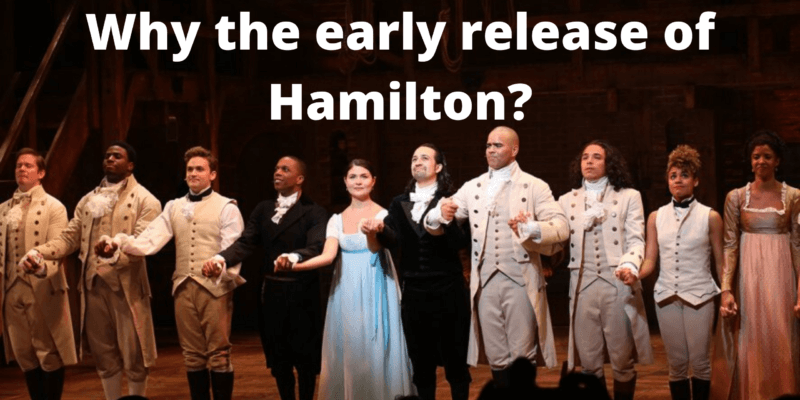 Yesterday we broke the news that the Hamilton movie was not heading to a theatrical release in 2021, but instead coming to Disney+ just in time for July 4th weekend. While this is absolutely fantastic for Hamilton fans across the world who have access to Disney+, it does pose a wider question:

Why has Disney decided to bring forward the release date of the Hamilton movie, and why is it moving to Disney+ instead of being released theatrically?

One of the biggest likely reasons has everything to do with keeping Disney+ subscribers interested over the summer months.

While we have Season 2 of The Mandalorian on the way later this year, there’s not a great deal of new content on the way to the service.

Related: The release of season 2 of The Mandalorian is not being delayed on Disney+

This isn’t an issue for someone like me who paid for a 12-month subscription, but a lack of new content may put people off the monthly cost, especially in times like these where cutting services we aren’t using makes a lot of sense.

The current worldwide situation has impacted the progress of many productions that were penned for Disney+. Still, the fact is, Disney is spending nowhere near as much money on original programming as the likes of Netflix and Amazon.

Now personally, I love Disney+. I think it’s worth it for 30 years of The Simpsons alone, let alone other shows I’ve been enjoying that include Prop Culture, The Clone Wars, The Imagineering Story and The World According to Jeff Goldblum.

Related: Disney says yes to second season of The World According to Jeff Goldblum

Hamilton may keep many Disney+ subscribers interested over the Summer and excited for what’s to come. After all, if Disney is releasing both Hamilton and Artemis Fowl onto the streaming service, many fans are asking, what’s next?

Of course, the other (and more likely) reason for Disney bringing forward the release date for Hamilton is likely to be a lot more simple. Many 2020 movies are being shunted to 2021 and while the Tony Award-winning Hamilton is a huge worldwide phenomenon, it’s still just a recording of the original Broadway production from 2016 and a show that many around the world have already seen, multiple times.

Are you happy with the offering on Disney+ currently and will you be tuning into the Hamilton film when it premieres on July 3rd? Let us know in the comments below!