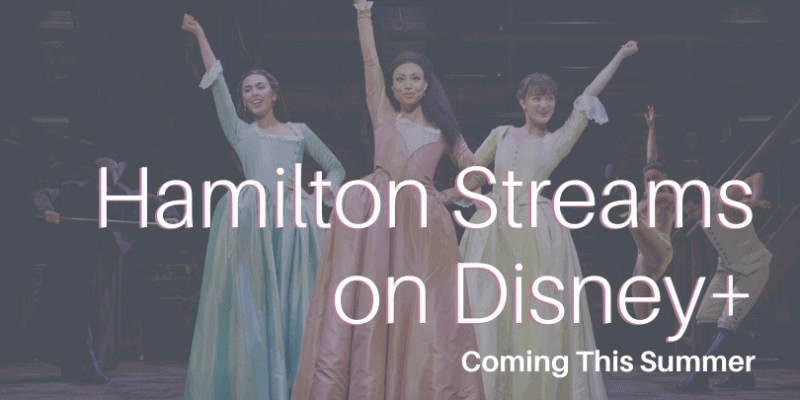 Look around, look around at how lucky we are to be alive right now… Hamilton takes to Disney plus on July 3, 2020. Lin-Manuel Miranda announced the news this morning on Twitter as well as in an appearance on Good Morning America. Originally scheduled for a theatrical release in 2021, the operetta is ours for the taking in a few short months.

It’s only a matter of time…

The press folks promoting Hamilton on the streaming service, Disney+, describe the new film as as “live capture” of the original Broadway production as the original cast performs. The movie will “transport its audience into the world of the Broadway show in a uniquely intimate way. Combining the best elements of live theater and film, the result is a cinematic stage performance that is a whole new way to experience Hamilton” as described on TheatreMania.

For further cast reference, Hamilton on Disney+ will also see Carleigh Bettiol, Ariana DeBose, Hope Easterbrook, Sydney James Harcourt, Sasha Hutchings, Thayne Jasperson, Elizabeth Judd, Jon Rua, Austin Smith, Seth Stewart, and Ephraim Sykes rounding out the ensemble. The 11 Tony Award-winning musical operetta has been quite popular with fans, who have also demanded the original Broadway cast in any sort of film revival that would appear. It looks like fans will be not only sated but very pleased with the film!

“I may not live to see our glory
But I will gladly join the fight
And when our children tell our story
They’ll tell the story of tonight”
― Lin-Manuel Miranda, Hamilton: The Revolution

EDIT: Hamilton arrived on time to Disney+ where fans streamed it in record numbers over the July 4th weekend, despite the censoring of a few curse words (this was in order to receive the PG-13 rating). Share your opinions online using #hamilfilm!

Did you tune into Disney+ as Miranda’s musical aired on July 3rd? Leave us a comment below about the Hamilton movie!