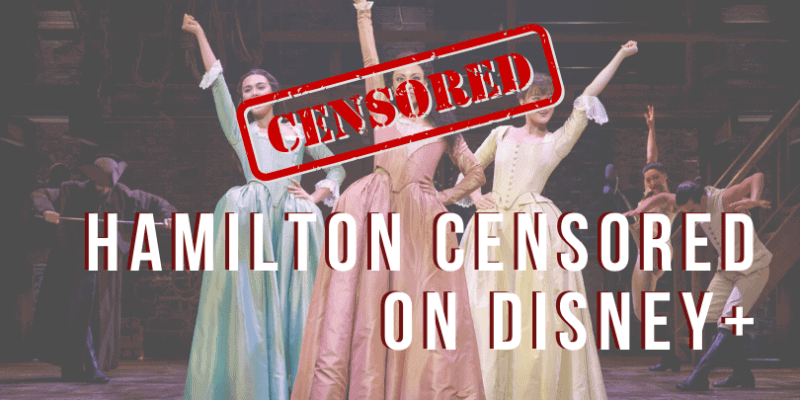 Our favorite lyrical artist took to Twitter today, celebrating the upcoming release of Hamilton on Disney Plus. It’s always a pleasure to read his tweets and follow along on his artistic journey. What we didn’t expect was to see Lin-Manuel Miranda answering fans with information about how Hamilton will be censored for its everlasting life on the digital streaming platform.

Right off the bat, we got clarification of exactly which moment we would be able to start watching as well as how Hamilton the musical will be censored.

Hamilton Will Be Censored

The streaming service, Disney+, has had its share of censoring, whether it be Wizards of Waverly Place and what appears to be cleavage or Splash with odd digital coverups. Fans have likewise been told from various sources that Hamilton wouldn’t face altering of any kind. But the “boss” has shared with us the lines to be taken by the censors.

There are rules about curse words (some very choice ones) and how many can be uttered before a film is given an automatic R rating according to motion picture guidelines. Lin-Manuel Miranda says there were three of the “f-word” in his show, and two have been cut from the scripts so the film can air with a PG-13 rating (one “F” swear word will remain in the whole show.) At this time, there are no plans to issue a fully clean version of the show, which fans will be happy about. Aside from the partial bleeping, the original cast will perform every note and lyric in this filmed version of Hamilton to its largest audience yet.

…I literally gave two fucks so the kids could see it:
1. In Yorktown, there’s a mute over “I get the f___ back up again”
2. “Southern *record scratch*kin’ Democratic Republicans.”
You can sing whatEVER you like at home (even sync up the album)!
Love you. Enjoy.

When Hamilton Will Air on Disney+

Fans were asking Miranda exactly when the Tony Award-winning-film would become unlocked on Disney+ for them. Midnight July 3rd but specifically in Pacific Time meant that this East Coast twitter follower would be able to start watching at 3am in her time zone. It’s all about a little math. In the meantime, sync up the stage show soundtrack and start singing!

1. I know this now! It’s midnight July 3 PST, so that’s 3am for us in NY and east coast, do the math til your time zone.
2. Not just one day.
3. You will just have it. For as many times as you like, right next to A Goofy Movie and Talespin and An Extremely Goofy Movie…❤️ https://t.co/v6h260FDSw

If you’re looking to turn on subtitles for Hamilton’s debut on Disney+, Miranda has some answers for you, too. Accessible language subtitles and content is coming; being pumped out by translators as fast as they can be approved, so they will continue to be added. It appears from this tweet that Miranda will be working on them himself, too! More of Miranda’s details on the stage production’s debut were covered today on Inside the Magic.

Ah, language subtitles! Thank you. Since we moved the release up by a year and a half, we’ll be adding alternate language subtitles as we get them (I’m so sorry for all the words, feverishly working translators, there are so many and that’s on me) https://t.co/Af2aMpkemX

What do you think about this change? Does the fact that Hamilton will be censored change how you feel about getting to watch it at home? Let us know in the comments below!