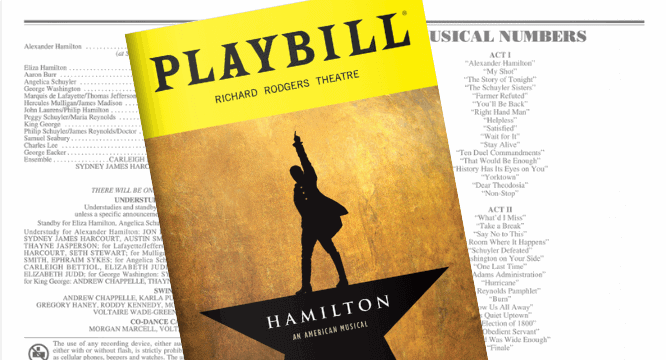 An integral part of viewing a Broadway musical (whether in New York City or in a local playhouse) is the Playbill. Your first taste of the show after your ticket is torn, before the Overture rings, before the curtain rises, is this folded stack of papers. It typically provides insight to the players, a director’s note, and a listing of musical numbers.

The new Disney+ offering of #Hamilfilm is no different! Browse through the exclusive Hamilton Playbill for the filmed stage performance.

The streaming operetta about founding father Alexander Hamilton was announced for Disney+ in May of 2020, to great fanfare by Disney fans and musical-theatre nerds alike. The press promoted Hamilton on Disney+ describe the new film as a “live capture” of the original Broadway cast as they perform on stage.

The performing arts movie will “transport its audience into the world of the Broadway show in a uniquely intimate way. Combining the best elements of live theater and film, the result is a cinematic stage performance that is a whole new way to experience Hamilton,” as described on TheatreMania.

As the viewing date for the original cast version of Hamilton drew nearer, we were treated to additional insight by Lin-Manuel Miranda discussing the partial censoring of Hamilton on social media platform, Twitter. The rap based show features a few adult themes and several curse words, some of which were bleeped or omitted in order to maintain a PG-13 rating for Disney+. Miranda “gave two F’s” for us to be able to have a front-row seat to Hamilton in our own living rooms and we’re so happy to have it.

Now browse the digital Hamilton Playbill program here or you can print the entire PDF playbill for your own home use. Use that 60-second intermission wisely!

Our favorite thing to do in the theatre is to follow along with the musical numbers and story inside the Hamilton Playbill. You can flip along to Lin-Manuel Miranda’s poetic masterpiece just as you would in the playhouse. We’re so happy Playbill added this enhancement to the streaming experience.

Did you watch the 11 Tony award-winning Hamilton on it’s streaming premiere date? Leave us a comment below to share your love of the hit Broadway operetta!