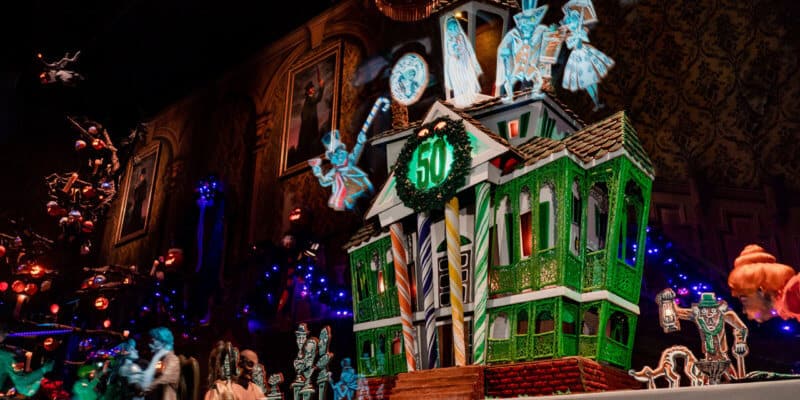 Last month marked the 50th anniversary of the Haunted Mansion attraction at Disneyland California. So this Halloween season, Disneyland is continuing its annual tradition of building a giant gingerbread house as part of the attraction in the park.

It’s no wonder that it took 13 frightfully spooky days to bring the massive gingerbread house to life. Six different Cast Members from the culinary staff at Disneyland Resort Central Bakery worked tirelessly on this year’s creation. Three of those Cast Members have had a part in causing the yearly gingerbread house to materialize for 18 years now.

Every year the creation grows and changes to incorporate the creativity, innovation and talents of the culinary masters involved with its creepy development. This is the 19th year of the devilishly delicious tradition, and we think it’s the best one yet! Just take a look.

And it takes a lot of ingredients to make such a giant dessert. (It stands nearly 10 feet tall!)

It was created with over 30 pounds of gingerbread, 120 pounds of frosting and icing, 75 pounds of powdered sugar and 140 pounds of fondant and more! That’s a lot of fat, calories and sugar. And we don’t even want to know how many calories are in the whole thing!

The Haunted Mansion came to Disneyland 50 years ago on August 9, and Disneyland has been celebrating all summer long. Stop by and see the creepy creation the next time you’re at Disneyland this Halloween season.

We love the Haunted Mansion Holiday Gingerbread House! What do you think? Have you ever seen the yearly gingerbread house at Disneyland? Let us know in the comments section below.