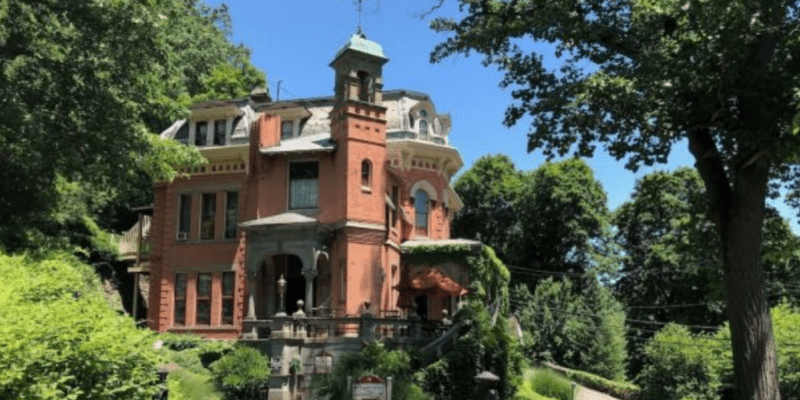 Look alive, Disney fans! Did you know the supposed inspiration piece for Walt Disney World’s Haunted Mansion sits high on a hill in Pennsylvania? The Harry Packer Mansion holds an eerie resemblance to our favorite ghost party house, and we’ve learned that you can visit this non-haunted hotel for an overnight stay!

Our tour begins here in this gallery, where you see images of the Harry Packer mansion’s spooky exterior and period-correct interior furnishings. How much did Disney Imagineers pull from this historic home? 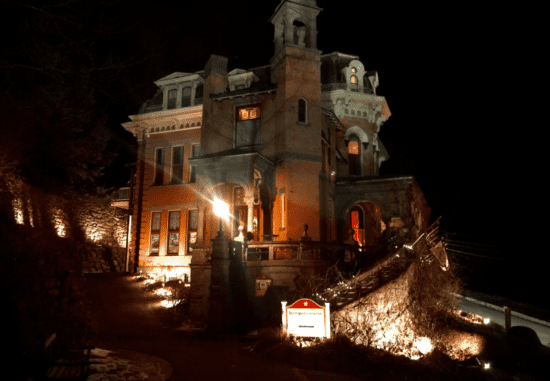 Shunned by many other aristocrats of his time (he shared his wealth and created a free university), Mr. Asa Packer was a canal boat owner who moved to Maunch Chunk, PA in 1833. Building his own home, he later built his son Harry a mansion next door as a wedding present in 1874. That building is now known as the Harry Packer Mansion.

In 1880, after his father’s death, Harry added a front veranda and the study wing, which were both designed by Quaker architect Addison Hutton. The front veranda area consists of famous New Your Blue stone and still showcases the original Mahogany ceiling and tiled floor, popular at that time. When looking at the photos, you can see the weathered, tarnished copper touches as well as the long and tall windows found on “our” Haunted Mansion in Liberty Square.

If you’re wondering about the town’s name, we learned that Jim Thorpe, Pennsylvania was originally founded in 1818  “Mauch Chunk” and in 1954, was renamed to “Jim Thorpe” in order to honor the world-famous Native American Olympic athlete. Thorpe was a member of the Sac and Fox clan, winning not one, but two Olympic gold medals in the 1912 Summer Olympics (one in pentathlon and the other in decathlon).

Don’t care to be the 1000th, ghost while staying at the Pennsylvania Bed and Breakfast? You can always visit the mansion for an evening and spend a spell in the Libations Lounge, offering, beer, wine, and spirits year-round from 4 pm to 9 pm for Guests over age 21. The full menu is available online.

The Harry Packer Mansion describes itself as,

The Harry Packer Mansion Inn is located in the Victorian village of Jim Thorpe, Pennsylvania. Perched atop Packer Hill, just steps from downtown, the mansion sits like a sentinel overlooking the town. The home’s impressive facade could have been taken from a Gothic novel, so much so that the building’s design caught the eye of Disney Imagineers and it became the inspiration for Walt Disney World’s “Haunted Mansion!”
The interior, however, is anything but spooky. Fifteen-foot ceilings, marble fireplaces and gilded mirrors reflect the elegance of the Victorian Age. The guest accommodations in the mansion and the adjoining Carriage House are furnished with period antiques, luxurious fabrics, and carefully selected artwork. All rooms have queen-sized beds and private bathrooms. Select rooms have additional amenities such as sitting rooms, electric fireplaces and whirlpool tubs. In addition to offering overnight accommodations, the mansion also hosts First Friday wine tastings and private functions.
The town of Jim Thorpe, PA is a scenic paradise nestled between three mountains. Boutique shops, museums, art galleries and first-class restaurants line the streets of historic downtown while area attractions such as skiing, whitewater rafting, mountain biking and hiking are just minutes away. Enjoy a rejuvenating stay in one of Pennsylvania’s most beloved towns.

You can book a trip to stay at the “real” Haunted Mansion in Jim Thorpe, Pennsylvania by calling Academy Travel. They know the travel ropes, and if you like, will make sure a ghost follows you home from your trip!
Would you stay at this historic bed and breakfast that inspired Disney’s Haunted Mansion? Leave us a comment below!