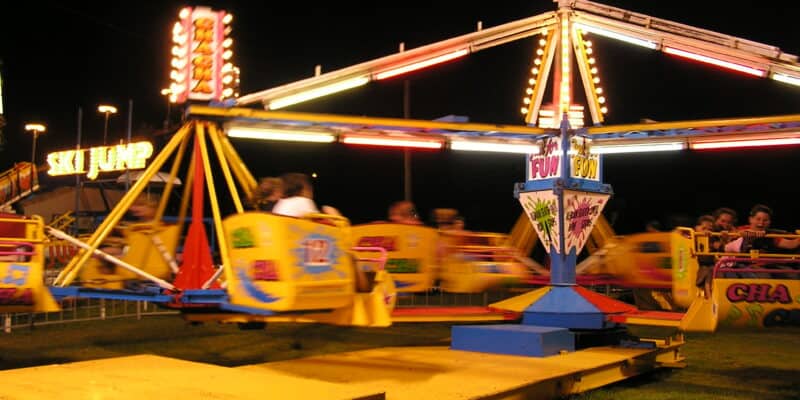 A Malaysian mother was left “mystified” earlier this month while taking her son for a day of family fun.

Although reports are unclear regarding whether the video was taken at a small theme park or a fairground, the bizarre footage is intriguing regardless.

One recent article noted that :

…the strange video was filmed by Nur Afrina Rosni earlier this month at a fairground in the city of Johor.

During the outing, her son Muiz wanted to ride an attraction featuring flying cars spinning in a circle. The adults were deemed too big for the ride, so the boy was partnered with another child. However, things took an eerie turn shortly after the ride got started.

In the video [below], Muiz and his companion are both visible riding in the yellow car at first. However, after the cart zipped past initially, only Muiz can be seen when the ride vehicle comes into view for the second time.

Another article from 7 News Australia notes that the mother said insists her footage is legitimate, and that her five-year-old son claimed he “did not know” where the other boy went:

“I am not mistaken. They were sitting together. I didn’t know the boy next to him. I think the workers seated them together. while I was filming a short video, the car came around a second time and my son was suddenly alone.”

Some TikTok and YouTube commenters have expressed concern that the boy may have fallen out of the ride vehicle, while others believe Rosni experienced a paranormal event. Currently, Malaysian authorities have not commented on the boy’s name or possible whereabouts at this time.

This certainly isn’t the first time Guests have experienced potentially paranormal activities in a theme park setting. In fact, Disney Parks Guests have shared a wide range of stories over the years.

One of the most common Disney ghost stories involves “George,” as explained by a Reddit user below:

George is probably the most famous spooky story at WDW. The story goes that when POTC [Pirates of the Caribbean] was being built a construction worker fell and died in the ride. No one has ever uncovered proof of a death at the ride. Cast members will attribute any malfunction in the ride to a ghost named George. CMs will have to say ‘good morning George’ when opening the ride and “goodbye George” when closing it. Some CMs say that George is so responsive that if you just say “George could you break the ride?” that something would break down. Some CMs say that George hasn’t responded since 2005 which probably just means that Disney fixed whatever broken piece of equipment was responsible for George’s visits.

What do you think happened to the boy in Rosni’s recent video?