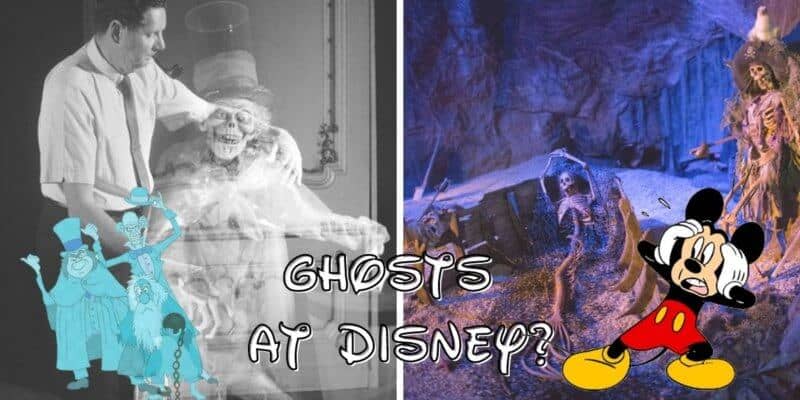 With Halloween just around the corner, one Reddit user took to the platform to ask others if they ever had any spooky experiences at Walt Disney World, such as seeing the man with the cane on the Haunted Mansion or having an experience with “George.” And the answers are so much fun! Let’s dive in and see what types of “paranormal” and “spooky stories” Guests shared.

The Man With The Cane

In case you aren’t aware, there is an urban legend of a man with a cane roaming through Haunted Mansion at Disney. The one Reddit user explains:

Another legend in Disney Parks is over in Adventureland on Pirates of the Caribbean. In case you aren’t aware, the Reddit user explains:

George is probably the most famous spooky story at WDW. The story goes that when POTC was being built a construction worker fell and died in the ride. No one has ever uncovered proof of a death at the ride. Cast members will attribute any malfunction in the ride to a ghost named George. CMs will have to say ‘good morning George’ when opening the ride and “goodbye George” when closing it. Some CMs say that George is so responsive that if you just say “George could you break the ride?” that something would break down. Some CMs say that George hasn’t responded since 2005 which probably just means that Disney fixed whatever broken piece of equipment was responsible for George’s visits.

Though this one Reddit user didn’t have any experiences for themselves, they love hearing these stories! “I have not personally had any paranormal experiences at WDW, but I’m obsessed with all of this! I love the man with the cane, and the crying boy.” They continued by asking about yet another legend, writing “Most people have heard about ‘George’ at POTC, but have you ever heard the urban legend of ‘the ladies’? Pure nightmare fuel.”

Which leads us to the next legend..

One Reddit user responded to this question above writing, “I’ve heard of the ladies, but also heard from a lot of CMs about ‘the wire haired lady’ that I think may be part of that legend. They say that they will see a floating wire haired lady on the security monitors on that same section. They say she will show up, then not be seen for years and carries a feeling of dread.”

Though there aren’t any actual legends on Tom Sawyer Island, one user shared it’s still a bit creepy walking around back there. “Not exactly related to the paranormal, but I get the chills when exploring the caves on Tom Sawyer’s Island. I think it’s the quietness and claustrophobia that gets to me,” they write.

And another user even responded with, “Oh yeah, especially the one cave at the back of the fortress.”

Though there wasn’t any actual activity, one user shared “It’s pretty eerie walking around World Showcase late at night after most guests are gone. It’s surprisingly dark back there and some of the pavilions (e.g. Morocco) have little nooks and crannies.”

I couldn’t write this article without including some of the fun and hilariously accurate answers about scary storied from a Disney vacation: the bank accounts and credit card statements!

So, now we want to hear from you! Have you ever had a paranormal or spooky experience while visiting the Disney Parks? Let us know in the comments below.