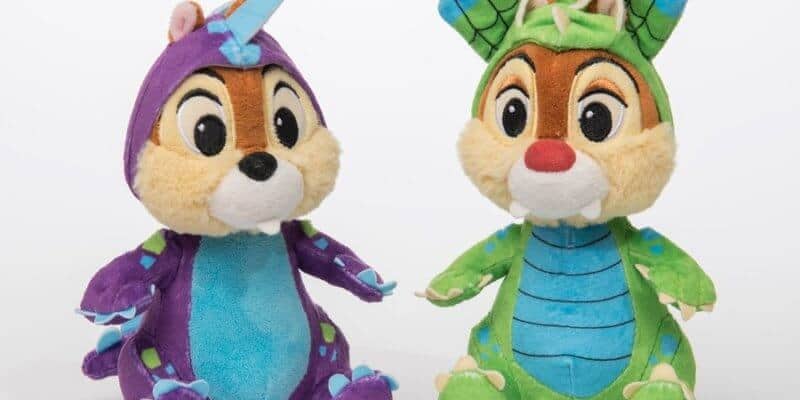 Shopping during Donald’s Dino Bash just got even more fun! In case you missed it, Donald’s Dino Bash has taken over DinoLand U.S.A. in Disney’s Animal Kingdom for the past year. The celebration was organized by Donald Duck himself after he discovered that he is in fact descended from dinosaurs! If you visit DinoLand during this time, you’ll be greeted with a dance party, new decorations (and a new soundtrack), and perhaps most exciting of all—character meet and greets!

One of the most popular sets of characters among guests visiting Donald’s Dino Bash has been Chip ‘n Dale all dressed in their adorable, brightly dinosaur suits! While so many guests have enjoyed meeting the characters in their festive costumes, the only souvenir they’ve been able to take away from the experience has been their PhotoPass photos…until now.

Disney seems to be catching on that so many fans are all about getting that merchandise (especially when it’s event-specific), so we are thrilled to share that plush versions of Chip ‘n Dale’s Dino Bash meet and greet are now available! These plushes come as a set (they’re holding hands!) and they’re definitely the perfect gift to remember one of the most festive celebrations in DinoLand history.

In addition to Chip ‘n Dale, fans can also pick up a plush of Donald himself all dressed in his Dino Bash best, both with all of the same details as their life-sized counterparts. For more shopping at “prehysterically low prices” head over to Chester and Hester’s Dinosaur Treasures, where you’ll find the new Dino Bash plushes along with toys, games, seasonal items and more character plushes. (While strolling through DinoLand, the Dino Bash plushes are also available at DinoRama cart, which is located in the carnival game area closest to Triceratop Spin.)

Can’t wait to meet Chip ‘n Dale or Donald in person? Donald’s Dino Bash also includes meet and greets with Launchpad McQuack and Scrooge McDuck! Get in touch with our friends at Academy Travel, Authorized Disney Vacation Planners who can help give you the Disney vacation of your dreams so you can meet your favorite characters. Click here for a no obligation vacation quote from Academy Travel to plan your next Disney getaway!

Will you be adding the new Donald’s Dino Bash plushes to your collection? Let us know in the comments!