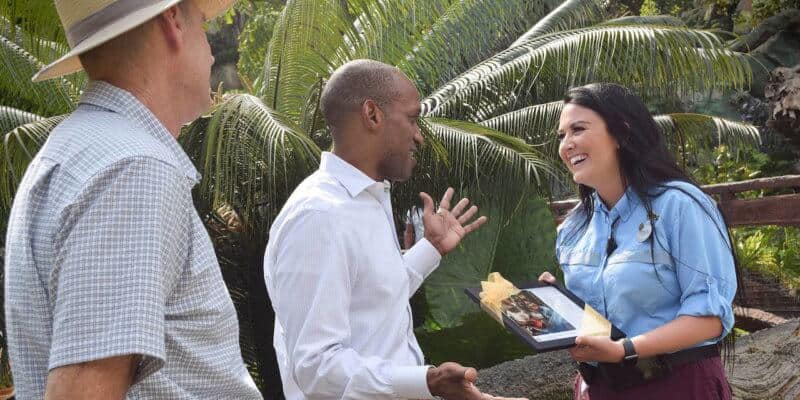 Last week, Inside the Magic brought you the story of Jessica Thomas, a Guest at Disney’s Animal Kingdom at Walt Disney World, and a Cast Member who went above and beyond what could have ever been expected of her. Yesterday, that Cast Member, Samantha Burns, was honored and recognized for what some consider a mightily heroic act delivered in a quiet and comforting manner.

Mrs. Thomas and her family were seeking refuge from the threat of Hurricane Dorian. They were staying in a Walt Disney World Resort hotel, but with two small children, Mr. and Mrs. Thomas knew they needed to find something with which to entertain the family.

But Mrs. Thomas has a history of episodes of claustrophobia, and just seeing the tunnel at the Na’vi River Journey attraction was enough to trigger her reaction. She began to be uncomfortable and fearful and to cry, so she got out of the boat and proceeded to walk away from the loading area.

But Cast Member Samantha Burns was paying attention. When she saw that Mrs. Thomas was upset, she was kind enough to approach her and see what was wrong. Mrs. Thomas was fearful of the ride, but she felt that not riding would ruin the day for her kids, who had never been to Walt Disney World before.

Her kindness made such an impression on Mrs. Thomas, that she took to social media to praise her efforts and to even find Burns online to thank her. Because of this, the story of Burns’s kindness has been reported by multiple news outlets and by many social media outlets.

Burns says that Guests like Mrs. Thomas are the reason she works at Walt Disney World.

Have you experienced uncommon kindness and generosity from a Cast member at a Disney Park? Let us hear your story in the comments below!