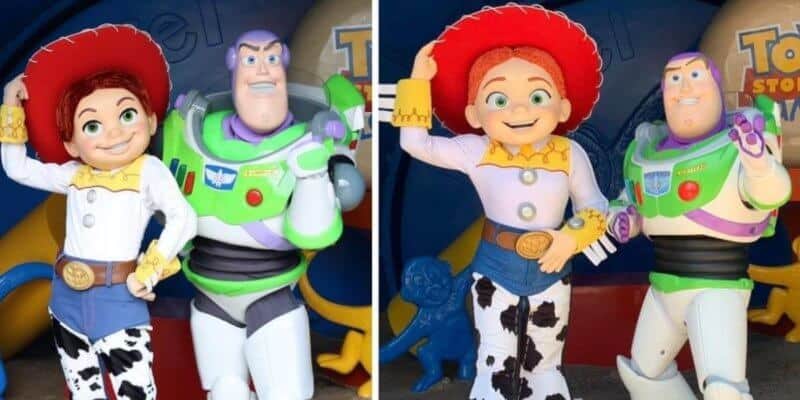 If there were a set of characters that were in desperate need of a rejuvenating facelift, it was the Pixar movie Toy Story team. Woody, Bo Peep, Buzz Lightyear, and Jessie all had character costumes that needed a little revamping — and now, it seems that everyone is looking fresh, and a lot more like their film self!

Bo Peep still looked quite similar to the Bo Peep that Disney fans are used to seeing at Toy Story Land at Disney’s Hollywood Studios and at Pixar Pier at Disney California Adventure. Although there are slight changes in the character’s face, the more significant changes came with Sheriff Woody’s transformation! We are sure Tom Hanks would be proud.

Thankfully, Hong Kong Disneyland did not stop there! Both Buzz and Jessie from the Toy Story film franchise have now been updated to match their pals. I mean, it would be pretty weird to show up and see two characters who look like their movie selves and two more that look a little terrifying and disproportionate.

360degreesofdisney took to Instagram to show a before and after of the pair.

Related: ‘Cruella’ Takes Over ‘Maleficent’ As the Villain With the Most Views

It is easy to see that both characters look much more toy-like now. Jessie is brighter, and Buzz’s costume remains similar but his face became a lot more rounded, and thankfully, his eyebrows a lot more subtle. Before the transformation, Buzz’s face reminded me a little too much of Emperor Zurg in shape. Now, Buzz looks a lot more like the Tim Allen version Andy and Bonnie know and love.

Take a closer look at the character changes below. How would I rate this improvement on a scale from 1-10? To infinity and beyond is my answer! John Lasseter, what do you think?

At the moment, these changes have only been seen in Hong Kong Disneyland, but here’s to hoping that the new Toy Story characters end up unified across all Disney parks. As I mentioned previously, I am glad these changes are occurring! Meet and greets are some of the best aspects of visiting a Disney Park, and having the character look as realistic as possible is always a top-notch way to ensure a fantastic Guest experience.

How do you like Buzz Lightyear and Jessie’s new theme park outfits?

Comments Off on Buzz Lightyear and Jessie Finally Get a Disney Park Makeover!