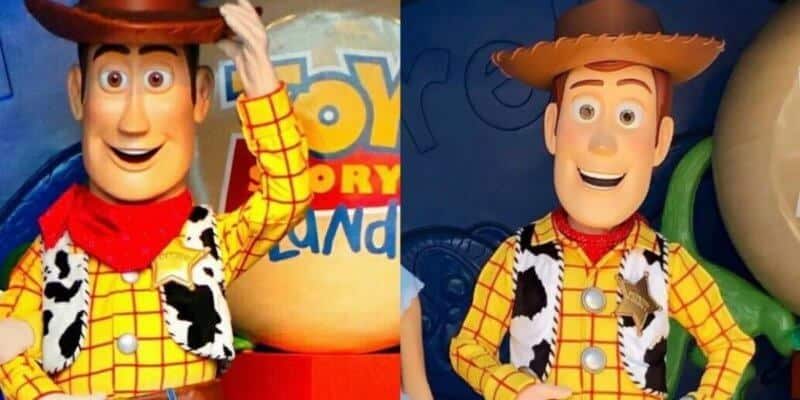 Just like Disney attractions and resorts must undergo refurbishment to stay updated, Disney characters often need a little sprucing up as well! If we take a look at the original Mickey Mouse costume, it is pretty clear that innovation is always needed when it comes to Disney.

At Hong Kong Disneyland it seems that as the park reopened, a few characters got an upgrade while the park was closed. DISNEY-ME (@LeDisneyMoi) tweeted:

⚠️ With the reopening of #HongKongDisneyland, and after 25 years, WOODY debuts his NEW LOOK at Disney Parks!!! You can now see him in Toy Story Land at HKDL ⚠️

⚠️ With the reopening of #HongKongDisneyland, and after 25 years, WOODY debuts his NEW LOOK at Disney Parks!!! You can now see him in Toy Story Land at HKDL ⚠️

As we can see in the above photo, not only has Woody received a new suit, but it looks like Bo Peep had a little TLC done as well! The Bo Peep costume is often one that garners a lot of Guest conversation due to the porcelain doll-looking face. This version, however, seems less shiny and more Barbie looking than its predecessor.

Krys Magic (@krystian_magic) even responded to the Tweet saying “Both Woody and Bo Peep have had such a glow up”, — and if we take a look at the bottom photo it is quite clear what the Toy Story characters have gotten done! That version of Bo, however, is quite dated as it would have been taken prior to Toy Story 4 coming out, as we can tell from the outfit.

Both Woody and Bo Peep have had such a glowup pic.twitter.com/47yyFHYfR0

It should be noted, however, that the new Hong Kong Disneyland version of Bo Peep does look quite similar to the Bo Peep that Disney fans are used to seeing at Toy Story Land at Disney’s Hollywood Studios and at Pixar Pier at Disney California Adventure. Although there are slight changes in the character’s face, the significant difference comes with sheriff Woody’s transformation!

Hollie Ballard (@jammyjimjams) also posted a side-by-side comparison of the two Woody costumes, with the left being the old version, and the right representing the new. Woody’s new face looks a lot younger and more toy-like. He also now has pants that are more 3-D and proportionate to the rest of his body.

Many fans continued to join in the Twitter conversation stating that Buzz Lightyear and Jesse should get a revamp next. At the moment, these costumes seemingly have only been added to Hong Kong Disneyland, but it would not be surprising to see them pop up in Toy Story Land at Disney’s Hollywood Studios in Disney World.

Personally, I am glad to see Disney fix up older costumes! Meet and greets are some of the best aspects of visiting a Disney Park, and having the character look as realistic as possible is always a top-notch way to ensure a fantastic Guest experience.