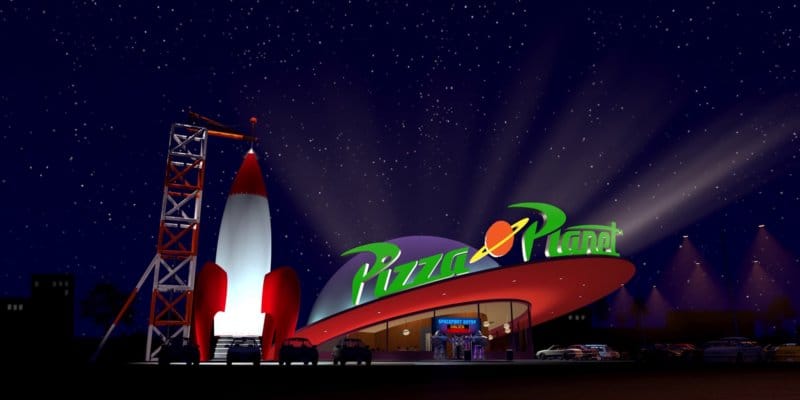 Toy Story Land at Disney’s Hollywood Studios in Walt Disney World is one of the most immersive lands located on property.

When Guests first step into this land, nestled in the back of the theme park, they feel as though they are instantly shrunken down to the size of a toy and are playing in Andy’s Backyard.

Toy Story Land brings the stories and characters from Pixar Animation Studios’ “Toy Story” films to life in a whole new way at Disney’s Hollywood Studios. Andy’s turned his backyard into a theme park for Woody, Buzz Lightyear and all his other favorite toys, and we’re invited to play along!

When you explore this vibrant land, you feel like you’re the size of a toy, with stacks of blocks towering above you, festive lights strung overhead and even benches are made from popsicle sticks! The land’s three attractions – Slinky Dog Dash, Toy Story Mania! and Alien Swirling Saucers – offer fun for the whole family as you immersive yourself in the stories of your favorite toys.

Toy Story Land is filled with several attractions — including Toy Story Mania, Slinky Dog Dash, and Alien Swirling Saucers, as well as one quick service location, Woody’s Lunch Box. A second food location, called Roundup Rodeo BBQ, is currently planned for the land. But what about that iconic restaurant that everyone loves from the first Toy Story film? Yes, of course, I am referring to the one and only Pizza Planet!

In my opinion, Disney missed an opportunity to bring the iconic Pizza Planet restaurant to life. Now, I understand that when Guests step into the immersive land of Toy Story Land at Disney’s Hollywood Studios, they are supposed to feel as though they are the size of a toy and are stepping into Andy’s Backyard, which is probably why Disney Imagineers did not build a life-size Pizza Planet location inside this section of the park.

However, what if they went about it differently?

Let’s say Andy received a Pizza Planet toy set for his birthday one year. The play set included everything a normal play set would — a Pizza Planet building, toy cars, miniature figures of people, and even small pizza boxes!

Now, if Imagineers went about it in this way, they could easily build a Pizza Planet inside Toy Story Land and set it up right next to Andy’s other toys — including the Aliens at Alien Swirling Saucers and Slinky Dog, Jessie, and Rex at Slinky Dog Dash.

Once Guests step inside the iconic restaurant, they will be met with everything just like in the film — including those adorable (annoying?) aliens that we know and love.

But what’s on the menu? Why pizza, of course! Plain, pepperoni, sausage, peppers and onions, even a Margherita pizza would be an option. But as for starters, Pizza Planet could offer things like mozzarella sticks, breadsticks, garlic bread, or garlic knots. Guests could also opt for a healthier option of soup or salad.

And for dessert, Guests could choose between a Toy Story themed cupcake, a cannoli, or even a chocolate chip cookie! As an example, you can view the menu for Alien Pizza Planet at Tomorrowland at Disneyland here.

What do you think? Did Disney miss an opportunity by not building a Pizza Planet into Toy Story Land? Or are you happy that they left it out? Let us know in the comments below.