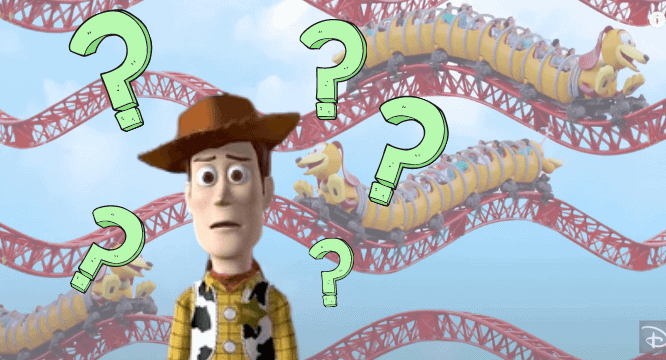 So who had a 10-hour video of a hypnotic Disney attraction on their 2020 bingo card? We didn’t either! In honor of Walt Disney World’s Toy Story Land turning two, the Disney Parks Blog is commemorating the “toy-riffic occasion” with a special tribute to the land’s star attraction: a 10-Hour Slinky Dog Dash Video. The virtual ride focuses on a specific repeat portion of the coaster track, for an “oddly satisfying, soothing experience” across your digital screens. The real-life reactions given by fans is what really adds another layer of entertainment!

Entitled “10 Satisfying Hours on Slinky Dog Dash | #DisneyMagicMoments”, the newest Disney Parks Blog addition to YouTube is bizzare, to say the least. The Slinky Dog Coaster turned two this month, marking the anniversary of both the family attraction and the Disney’s Hollywood Studios land. Along with Alien Swirling Saucers and a revamped Toy Story Mania, Slinky rounds out Andy’s backyard as a family roller coaster.

As a birthday present, we were given a 10-hour loop of the “camelback humps” portion of the Slinky Dog Dash coaster, projected against a blue sky, and looped over and over. Don’t try to adjust your speakers, because there is no music or sound effects to this virtual ride video. At least there’s no wait time or FastPass+ needed!

We’re marking the anniversary of Toy Story Land with a special ride on Slinky Dog Dash. A never before seen 10-hour ride! Relive the wonder of your last visit to Walt Disney World Resort in this oddly satisfying video. And get ready to revisit Slinky Dog and other toys on July 15 when Disney’s Hollywood Studios reopens.

Disney fans learning about this video, and then subsequently watching it this morning produced some very entertaining social media fodder. Youtube fans’ comments read like Amazon reviews you just can’t quit. Hilarious reactions, good-natured jokes, and just a whole bag of, “well, we didn’t WANT this, but it sure was what we NEEDED!”

More serious reactions included appreciation for the “soothing” quiet video which is helpful for those feeling overstimulated. Over on Twitter, user Ashley Carter joked that absolutely no one asked for this strange ride vehicle video, and yet here we were. Avid slinky fans and followers of Carter’s chimed in that they initially would have loved something like this, but after watching it, weren’t so sure anymore! Every comment was made in very good humor and some even appreciated it’s hypnotic quality.

I actually have been asking for this for many years now. In fact my request predates Disney even coming up with the idea for Slinky Dog Dash! 🙂 (I am sorry I did too, that is really hard on the eyes)

Back on the Disney Parks Blog post itself, one sole commenter, Erik, (at the time of this article) noted it’s “mesmerizing experience,” looking forward to making up for missed family coaster days once Disney’s Hollywood Studios reopens on July 15th, 2020. While many of us won’t be on property to celebrate with Woody and Buzz, if you’re looking to ride Slinky Dog Dash in real life, look to Academy Travel for some help. They’ve got the skills to get you to the park opening as honorary toys. To get a free no-obligation quote, call Academy Travel at 609-978-0740. Academy Travel is an Authorized Disney Vacation Planner and has been designated as a Diamond EarMarked Travel Agency specializing in Walt Disney World, Disneyland Resort, Disney Cruise Line, Adventures by Disney Vacations and Aulani, a Disney Resort & Spa.

Leave us a comment about your thoughts on the 10-Hour Slinky Dog Dash Video! Were you expecting something so fun or unique?