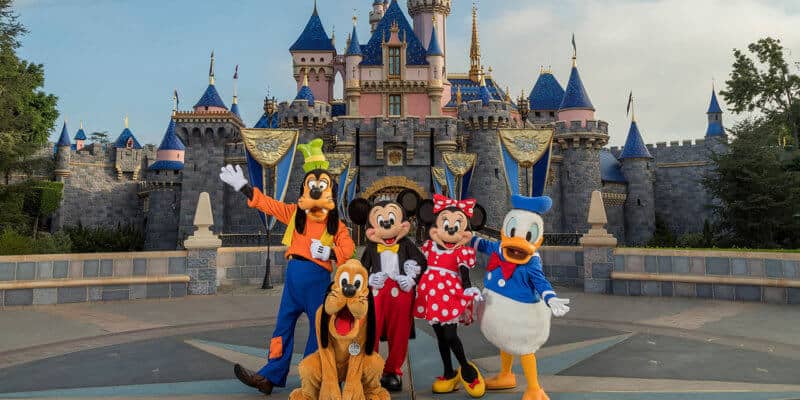 Character meet and greets are one of the main features that make visiting the Disney Parks so special. Character dining and interactions throughout the parks can be the highlight of a little kid’s (or adult’s) day.

Mickey Mouse, Minnie Mouse, Goofy, Pluto, Donald Duck, Daisy Duck, Chip, and Dale are all part of the OG Disney crew, so it was no surprise that the top three answers all came from here. No matter what Disney Park you’re at around the world, this team will be there to welcome you with open arms.

One of my favorite memories is having a dance with Chip in front of the Town Square Firehouse on Main Street U.S.A. at Disneyland Park. Who do my fellow Disney fans enjoy meeting the most at Disney Parks?

These two tied for the third-place spot. Donald and Goofy are just so high energy and are always up for smothering you with some love. You’re sure to have a smile on your face after spending some time with one or both of them!

This classic beauty is just so precious. She’s cute, sweet, and the love of Mickey Mouse’s life. Minnie Mouse and Daisy Duck can both bring a little bit of sass too!

I don’t think anyone would have doubted this answer. It did after all start with a mouse — This mouse — and he will forever represent all the imagination that has come from Walt Disney himself. Mickey Mouse is everyone’s best friend so who wouldn’t want to spend the entire day hanging out with him!

Winnie the Pooh, Piglet, Eeyore, Tigger, Rabbit, and Owl are all a part of Christopher Robin’s crew when he visits the Hundred Acre Woods. The latter two aren’t characters you often see at the parks, but recently they’ve been making appearances in the character cavalcades around Walt Disney World.

Winnie the Pooh is my favorite Disney character of all time, but if you can catch up to Tigger, he’s a lot of bouncy fun and another fan favorite to meet!

Disney Princesses and their gorgeous gowns are stunning and magical. Disney fans love meeting Disney Princesses in the likes of Tiana, Belle, Ariel, Rapunzel, Cinderella, Snow White, Anna, and Elsa, but we can’t forget a few of their counterparts too like Aladdin, the Evil Queen, and the Seven Dwarfs.

There are three that stand out amongst the royals though, and they are Tiana, Ariel, and the sisters of Arendelle — Anna and Elsa. Start practicing your elegant wave for the next time you see any of them in the parks!

Yes, we know that meeting all the Disney characters are a grand old time, but some of these responses were quite unique! Here’s where you can find some of the more unusual fan favorite character interactions.

You can play with Peter Pan in Fantasyland at Disneyland or Disney World, or one of the newer encounters — The Stormtroopers at Galaxy’s Edge. They love interrogating Guests who they believe are spies of the Republic, but you better have some thick skin for this one!

Pretty soon we’ll see more of the Avengers, such as Spider-Man, with the opening of Avengers Campus at Disney California Adventure, which still does not have an opening date but Inside the Magic will keep you posted as we get information regarding this highly anticipated land.

Do you have a favorite character to meet at the Disney Parks? Tell us who in the comments below!