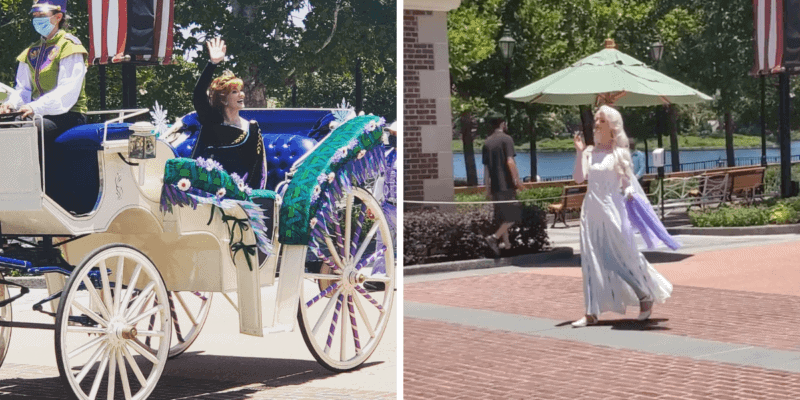 As Cast Members walked around World Showcase during their exclusive preview day at EPCOT, they received a very special surprise — An appearance by Queen Anna and Queen Elsa.

Anna was seen being driven around World Showcase in a horse-drawn carriage while Elsa was found walking.

Check it out: The picture and video were shared by Instagram user, @danis_dream_adventure.

It makes sense to see Anna and Elsa greet Guests around EPCOT’s World Showcase because of the attraction, Frozen Ever After, is situated in EPCOT’s Norway pavilion.

We can also see the two Queens of Arendelle are surrounded by an entourage of cast members and like in Magic Kingdom, the Guests are giving them plenty of space.

These character appearances are very similar to the others we have covered throughout Walt Disney World.

At the Magic Kingdom’s Annual Passholder preview, we noticed characters up on the Main Street train station waving down to everybody, Winnie the Pooh’s friends were seen on the front porch of the Crystal Palace, Stitch was seen on stage in Tomorrowland — this all provides fantastic opportunities for socially distanced selfies — and some have boarded a parade float, or a streetcar, and participated in one of the very small cavalcades that move along the parade route, greeting Guests as they go by.

EPCOT will reopen with Disney’s Hollywood Studios on Wednesday, July 15. Its beloved International Food and Wine Festival is expected to begin immediately.

Does seeing Anna and Elsa back in the theme parks make you crave another Disney Vacation? If so, our friends at Academy Travel are here to help. Backed with years of experience and award-winning customer service, Academy’s agents know what it takes to help you create the best Walt Disney World vacation for your budget. Click here to learn more and receive your free, no-obligation quote today.

What do you think of the modified character interactions? Let us know in the comments!