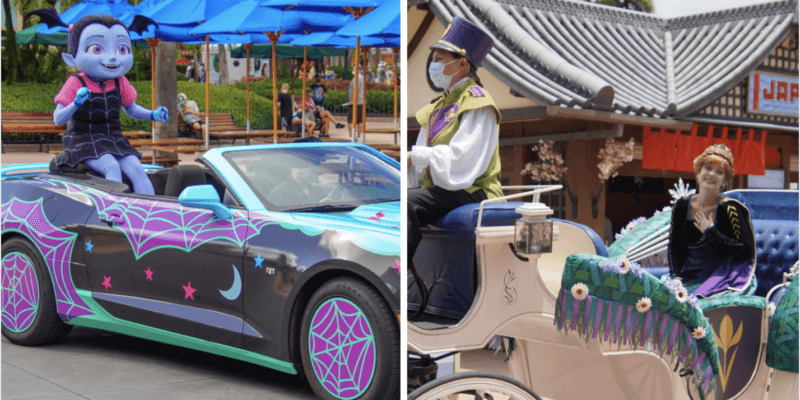 When Walt Disney World Resort began its phased reopening on July 11, it was without many of the experiences that make a Disney vacation so magical. Without fireworks, character meet and greets, and popular parades, Disney fans were left wondering how, exactly, The Walt Disney Company would handle these major changes.

Fortunately, Walt Disney World theme park officials have kept the magic alive in the most unexpected ways! Instead of character meet and greets right now, Guests get to enjoy brand new character cavalcades.

These are similar to parades, but occur at unannounced times throughout the day. If you’ve ever seen the long-running Rainy Day Cavalcade at Disneyland Resort, you know how much fun cavalcades can be.

Recently, Twitter user @bioreconstruct has shared a number of aerial Disney World character cavalcade photos in real-time! These are happening at all four theme parks, with different characters represented in each cavalcade event.

Just yesterday, the account shared a photo of a live character cavalcade near Echo Lake at Disney’s Hollywood Studios. It was posted alongside a prior Tweet of Disney Jr.’s Vampirina riding in a spider web themed car.

Aerial view of Disney's Hollywood Studios, where a character cavalcade is near Echo Lake. pic.twitter.com/HY3dPJVjsc

@bioreconstruct also shared this photo of Anna and Elsa’s cavalcade carriage backstage at EPCOT yesterday afternoon. This carriage is used to convey the Frozen sisters around the theme park as they wave to adoring Guests.

An aerial look at Anna's horse and carriage in backstage EPCOT. pic.twitter.com/cHQZa1fRXz

Other Disney World’s character cavalcades that are not pictured here include Merida and Tinker Bell at the Magic Kingdom and a river cruise featuring Mickey Mouse, Minnie Mouse, Donald Duck, and Daisy Duck at Disney’s Animal Kingdom! Other cavalcades, including a Halloween themed addition, are expected soon.

We love how Disney is continuing to keep the magic alive, even during these challenging times. Have you seen Disney World’s character cavalcades since reopening?

Remember, our friends at Academy Travel can help you plan the Disney theme park vacation of your dreams. Contact them today for a free quote.

Comments Off on See NEW Disney World Character Cavalcades From the Sky!